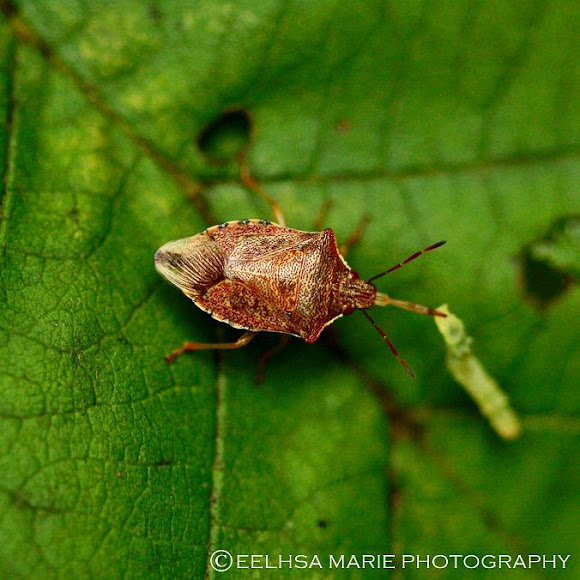 The Spined Soldier Bug is a non-specific predator, with a reported 90 species that it will eat. Some of the prey on the list include: Mexican Bean Beetle Larvae, Diamondback Moth, Fall Armyworm, Cabbage Worm, Velvetbean Caterpillar and Flea Beetles. If it is unable to find sufficient food, the Spined Soldier Bug will reportedly feed on plant juices. This beetle has been associated with various crops in terms of helping to cut down pest populations. Crops include: alfalfa, apples, asparagus, beans, celery, cotton, eggplant, potatoes, onions, soybeans, sweet corn and tomatoes. Due to the Spined Soldier Beetle's effectiveness in helping in this regard, it has been introduced into other countries, such as Russia and Eastern Europe.

The Spined Soldier bug is a species common in North America. It can be found where prey is plentiful, such as on certain crops or the leaves and branches of trees.

I noticed this particular Spined Soldier Bug on an Alder shrub. It was in the process of eating a Sawfly Larva.