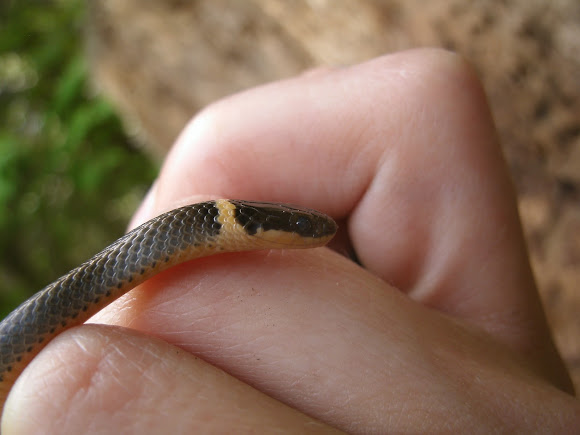 The dorsum of ringneck snakes varies among subspecies from blue-gray to light brown to greenish-gray, but it is always solid, except for a distinctive golden ring around the neck. The ring may be interrupted or, in the cases of the regal ringneck snakes (D. punctatus regalis) and key ringneck snakes D. punctatus acricus, may appear only as a trace or be completely absent. The abdomen is orange-yellow, but western and extreme southern subspecies show a change in color to orange-red toward the posterior. The presence and configuration of black spots on the abdomen can be used to distinguish subspecies. (Conant and Collins, 1998) Eastern subspecies have 15 scale rows at the anterior end; western subspecies have 17. Scales are smooth and the anal plate is divided. The species has a length of 25 to 38 cm, except D. punctatus regalis, which measures 38 to 46 cm. Newborn snakes have the same markings and coloration as adults. Generally speaking, adult females are longer than adult males. Molting occurs in all months of the year. (Blanchard, 1942; Conant and Collins, 1998; Myers, 1965)

Occurring throughout eastern and central North America. Their range extends from Nova Scotia, southern Quebec, and Ontario to south-central Mexico, covering the entire eastern seaboard except for areas along the gulf coasts of south Texas and northeast Mexico. The range extends laterally to the Pacific coast except for large areas in drier regions of the western United States and Mexico. Areas with abundant hiding places are preferred by all subspecies of D. punctatus but, beyond that, they occur in a wide variety of habitats. Gently moistened soil and 27 to 29 degrees Celsius provide optimal conditions. Northern and western subspecies prefer coverage under stones or under the loose bark of dead trees, and are often found in open woodlands near rocky hillsides. Southern subspecies tend to stay in conspicuously wet locales, such as swamps, damp forests, or riparian woodlands.

Found a whole nest of these under bark of a rotting stump. They make a bad smell if you pick them up