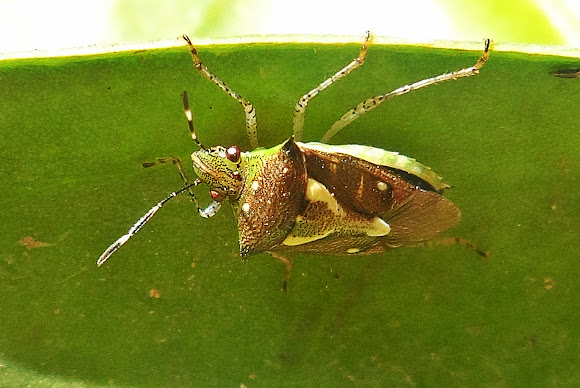 Linnaeus described the Ypsilon Stink Bug in 1758. It is the most widespread species in the genus, found from San Luis Potosí, Mexico south to northern Argentina and Uruguay. It is also found on Nevis, St. Vincent, and other islands of the Lesser Antilles (Rolston, 1978). In Mormidea ypsilon the shoulders may be rounded narrowly, or else are spinose. The scutellum is longer than wide. The membrane is somewhat smoky. The basal antennal segment is pale, variously streaked in a darker color. The remaining antennal segments are dark, with the exception of narrow pale-colored bands on the fourth and fifth segments (Rolston, 1978). (http://www.americaninsects.net/ht/mormid...)