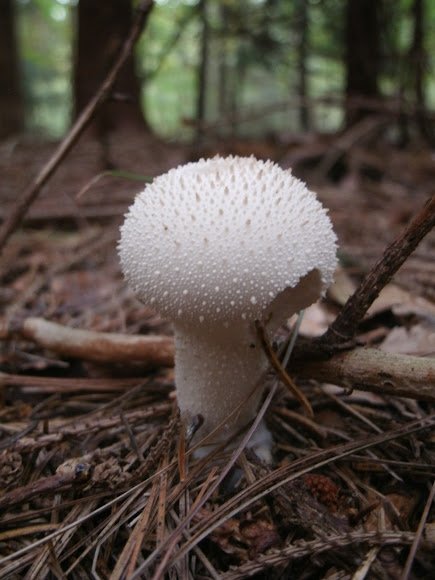 Fruiting Body: Shaped like an inverted pear, with a fairly prominent stem-like area and a roundish to flattened top; 2.5-7 cm wide; 3-7.5 cm high; dry; covered with whitish spines when young and fresh, but the spines often falling away by maturity and leaving scars on the surface; by maturity developing a central perforation through which spores are liberated by rain drops and wind currents; white, becoming discolored and eventually sometimes brownish; with a white, fleshy interior at first; later with yellowish to olive granular flesh and eventually filled with brownish spore dust.

Saprobic; growing alone, scattered, gregariously, or in clusters; in woods under hardwoods or conifers, but also common along roadsides and in urban settings; rarely on very decayed wood; summer and fall in temperate regions, almost year-round in California and along the Gulf Coast; very widely distributed and common.