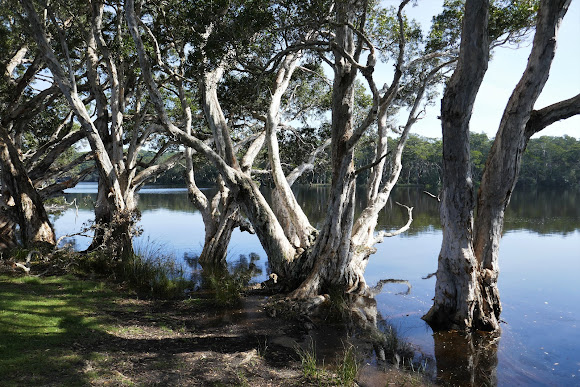 The broad-leaved paperbark is an Australian native evergreen tree. It can grow to a height of 25 metres and a spread of 5 metres or more, and has characteristic papery bark. Distribution is along the east coast of Queensland and New South Wales, plus it is found in New Guinea and New Caledonia. Flowers appear as short bottlebrush spikes, creamy white in colour and 50 mm long, and provide a rich source of nectar for lorikeets, honey eaters, flying foxes and butterflies, and its leaves are also a food source for koalas. Main flowering is in autumn. The trees also resprout vigorously from epicormic shoots after bushfire, and have been recorded flowering within weeks of being burnt. Trees can live for over 100 years. In Australia, Melaleuca is the third most diverse plant genus with up to 250 species.

In Australia, Melaleuca quinquenervia occurs along the east coast, ranging from Cape York in far north Queensland to Sydney in the south. It grows in seasonally inundated plains and swamps, along estuary margins and coastal lakes and lagoons, and is often the dominant species. It grows in silty or swampy soil and plants have grown in acid soil of pH as low as 2.5. This spotting was located on the shores of Avoca Lake, at Avoca Beach on the NSW Central Coast.

Paperbarks are quite amazing trees. The bark has the most amazing texture and is quite spongy to touch, and the flowers attract all sorts of wildlife. The wikipedia link also provides loads of information on the various uses of this species, particularly by aboriginal Australians. Paperbarks are dotted all around the shores of Avoca Lake, as well as every other lagoon in the Central Coast region. Avoca Lake is an intermediate saline coastal lagoon that is fed by stormwater runoff from the surrounding hills, as well as being occasionally opened at the beach which separates it from the sea. This allows salt water to enter into and flush the lagoon, which means that Melaleuca quinquenervia is a salt-tolerant species (plus it's drought-tolerant as well). It's unphased by a full saltwater environment, although freshwater from a catchment area of 10.8 km2 would eventually dilute salt levels until the lagoon is once again opened to the sea. NB: I refer to this body of water as a "lagoon" because that is what it is - a stretch of salt water separated from the sea by a low sandbank or coral reef. The average depth is less than 0.4 metres (surface area 70 hectares), and until fairly recently was called Avoca Lagoon, and prior to that, Bulbararing Lagoon. Some bright spark in the council office needs to brush up on basic geography, and realtors should pull their collective heads in too. A lagoon is no-less glamourous than a lake.

Thanks, Stephen. Much appreciated.

Eucalypts are my faves, and so awesome to see large stands in their native range. The smell of a euclypt forest is amazing. Blue and red gums I adore, and melaleucas. And mountain orange gums. Problems abroad for sure, but we are a bigger problem that the tress, and we never seem to learn. Thanks for the congrats, Rob :)

Congratulations Neil. Great to see them where they are supposed to be. One of my favorite Aussie trees.

Congratulations on the SOTW. Great series. Thanks for sharing Neil..

A little bit of bush zen is good for the soul. So is sushi, cos that's what I am eating as we speak ;) Thanks, Sukanya.

Oh wow, thank you so much for this SOTW. I appreciate it, and cheers for the congrats Daniele, Antonio, Liana, Mark and Leuba. It might be time we go and catch that fish, Leuba.

Congrats Neil.
Although now an invasive pest in some overseas locations these so deserve to be seen in their natural habitat.
Beautiful spotting.

Cong on a very well deserved SOTW Neil! Enjoyed your notes. Thank you for sharing :)

Great series Neil,great info and personal notes,you have a writer "rib" :-)
Congrats on the well deserved SOTW and thanks for sharing

Congratulations Neil, competition was tough, and your broad-leaved paperbarks were voted Spotting of the Week! With extensive notes combining research and personal observations together with a full set of photographs you continue to make the best of Project Noah :-)

I look forward to hearing about it, Leuba. A good and very tasty experiment, so please give it a try. Barramundi or a lovely big snapper, perhaps? And cheers, Brian. Fingers crossed :)

That's good. I'll let you know how I go.

Congratulations Neil for your SOTW nomination.

I love the bark too, Leuba. It's a very 'tactile' experience, and I love the colours and textures. Mark can have his canoe. They made 12 canoes in the movie, so what's one more? Besides, it's more environmentally friendly than plastic or fibreglass. And the fish sounds excellent. The bark can be peeled off in sheets and you wouldn't need that much.

Well said Neil ! Lovely spotting with great notes. I am always fascinated by the bark. I would love to bake fish wrapped in paperbark & Mark wants to build a canoe....are we being environmental vandals ?

Thanks, Maria. I must be OCD. Good therapy that keeps me off the streets.

Another set of interesting notes on one of your spottings, Neil!

Thank you very much, Ashley. I appreciate the nomination.