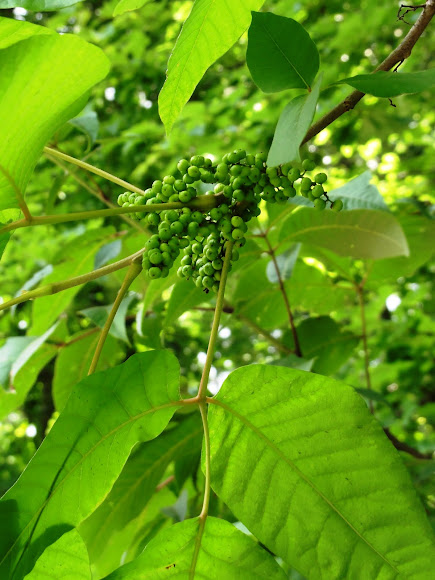 Poison ivy spreads either vegetatively or sexually. Poison ivy is dioecious; flowering occurs from May to July. The yellowish- or greenish-white flowers are typically inconspicuous and are located in clusters up to 8 cm (3.1 in) above the leaves. The berry-like fruit, a drupe, mature by August to November with a grayish-white color. Fruits are a favorite winter food of some birds and other animals. Seeds are spread mainly by animals and remain viable after passing through the digestive tract. Although used as food and shelter by various animals and insects, poison ivy is not a keystone species and its gradual and steady eradication would not harm the environment.

Eastern poison ivy is found throughout the eastern United States and adjacent Canada south to Guatemala.

Well known for its production of urushiol, a clear liquid compound found within the sap of the plant that causes an itching, irritation and sometimes painful rash in most people who touch it.