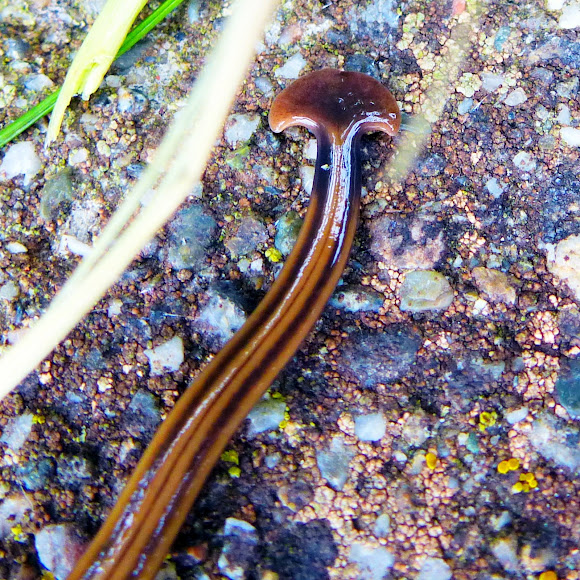 An unusual worm may be in your garden that you need to know about. You also need to kill it. It’s the land planarian, a slimy iridescent flatworm with a hammer head. It was once thought that it was a neutral animal in the garden – eating some beneficials and some pests, but that is wrong. Rather than helping control termite larvae, grubs and other pests, etc. it seems that it is only a destructive pest that needs to be gotten rid of. It only eats earthworms. The predatory land planarian is no friend of earthworms. In fact, they are parasites that eat earthworms and can wipe out entire populations. It can stretch out up to 20 inches long, gliding along on a layer of mucus secreted from glands along its underside. This gruesome worm feeds by extending its throat out of its mouth and into the earthworm. Small bits of the earthworm is swallowed a little at a time. Land planarians are native to Indo-China, but are have been transported to many other parts of the world in the soil of greenhouse plants. They can survive in freezing climates but don’t do well in dry climates. They are primarily nocturnal, but can often be found out and about early in the morning especially on wet surfaces. They can also be found on the trunks of trees. Smashing this pest is the thing to do, except for the fact that it grows back from small pieces. A better solution is to spray with orange oil to completely destroy it and prevent return.

Not a problem at all meredyth, I'm more than happy to help in any way I can! I look forward to any more spottings you share if you plan to do so :)

...and Alice & for all your help. I clicked on the website details & it worked.

Thanks for posting that information on my spotting Mark. As I said, the photos are blurry but hope information was worthwhile.

Stacy,that is weird. It does seem like that but in reality if you check her page ,it is still there!!

Alice, it says that the link doesnt exist?

I've sent the link to the video via email Meredyth. Let me know how you go & if you need clarification about anything please don't hesitate to ask

Thank you Alice. Please do.

Meredyth, I received your email and the photos. They were both in JPG form, so I didn't have to do anything to them,and I went through the process of uploading them for a spotting (without submitting it of course) to see if they would upload. They both uploaded fine so I've made a very short tutorial video for you showing you exactly how i did it, if you'd like to watch it and give it a go I'll be more than happy to send you the link via email. It's nothing too complicated, very straight forward.

Forget that. Just saw your email on Jemma's comment. Thanks Jemma.

Alice, I thought it was strange that someone had my email address. I don't know who I sent it to. How do I send the photos to you?

Thanks Jemma :). The one Jemma wrote is my email, I haven't sent you an email previously meredyth, I don't have your email address. Maybe you sent one to mark?

Can you sent me a new email. I deleted the other one.

I sent it added on to the last email you sent. I'll try again.

No meredyth I didn't receive the email at all, did you send it to the adders I posted below?

Alice, did you receive the 2 blurry photos? If you did, I presume you're having trouble with them too.

Yeah that'd be best, i'll have a go at seeing if i can get it right & send it back. My address is alicegreenup@hotmail.com

Thanks. I'll send you an email.

I tried it that way but same result. Information says, 'shortcut is not the right type of file'

Hmm that's odd. Are you 100% sure it's a jpg? If you like you could send me the photo via email and I can have a look for you, attempt to fix the problem and then send it back to you. I'm usually quite good with computers but it's the kind of thing that's much easier to fix if you can see what's going on unfortunately.

Alice, I managed to get the photos to the desk top but when I dragged them across, there was no picture, just information on the picture's details.

and 36 other people favorited this spotting