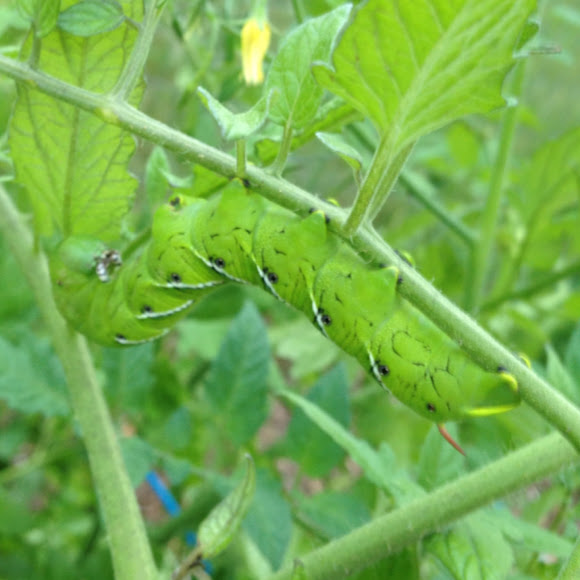 Manduca sexta is a moth of the family Sphingidae present through much of the American continent. Commonly known as the tobacco hornworm and the goliath worm, it is closely related to and often confused with the very similar tomato hornworm (Manduca quinquemaculata); the larvae of both feed on the foliage of various plants of the family Solanaceae. The tobacco hornworm is sometimes kept as a pet by children throughout its range. It can be distinguished by its seven diagonal lines on its sides; tomato hornworms have eight V-shaped markings.[2] A mnemonic to remember the markings is tobacco hornworms have straight white lines like cigarettes, while tomato hornworms have V-shaped markings (as in "vine-ripened" tomatoes). M. sexta has mechanisms for selectively sequestering and secreting the neurotoxin nicotine present in tobacco.[citation needed] M. sexta is a common model organism, especially in neurobiology, due to its easily accessible nervous system and short life cycle. It is used in a variety of biomedical and biological scientific experiments. It can be easily raised on a wheat-germ based diet. The larva is large, and thus it is relatively easy to dissect it and isolate its organs.

M. sexta has a short life cycle, lasting about 30 to 50 days. In most areas, M. sexta has about two generations per year, but can have about three or four generations per year in Florida.[3] Eggs M. sexta eggs are spherical, approximately 1.5 millimeters in diameter, and translucent green in color.[2] They typically hatch two to four days after they are laid. Eggs are normally found on the underside of foliage, but can also be found on the upper surface. Larvae M. sexta larvae are green in color and grow up to 70 millimeters in length. Under laboratory conditions, while fed a wheat-germ based diet, larvae are turquoise due to a lack of pigments in their diet. M. sexta blood contains the blue-colored protein insecticyanin. When the larva feeds on plants, it ingests pigmentacious carotenoid proteins. Carotenoids are primarily yellow in hue. When bound together, the protein complex is green. During the larval stage, M. sexta caterpillars feed on plants of the family Solanaceae, principally tobacco, tomatoes and members of the genus Datura. Near the end of this stage, the caterpillar seeks a location for pupation, burrows underground, and pupates. The searching behaviour is known as "wandering". The instinct of wandering can be visually confirmed by spotting the heart (aorta) which is a long, pulsating vein running along the length of the caterpillar's dorsal side. The heart appears just as the caterpillar is reaching the end of the final instar. M. sexta has five larval instars which are separated by ecdysis (molting), but may add larval instars when nutrient conditions are poor. A common biological control for hornworms is the parasitic braconid wasp, Cotesia, which lays its eggs in the bodies of tobacco hornworms. The wasp larvae feed internally, and emerge from the body to spin their cocoons. Parasitized tobacco hornworms are often seen covered with multiple white, cottony wasp cocoons, which are often mistaken for large eggs. Pre-pupae Before the larva pupates, it goes through a stage called the pre-pupa, where its shrinks considerably and prepares to pupate. Often, people mistake this stage as a dead, or dying, caterpillar. Pupae The pupal stage lasts approximately 18 days under laboratory conditions (17 hours light, 7 hours dark, 27 °C). When reared on a short-day photoperiod (12 hours light, 12 hours dark), pupae enter a state of diapause that can last several months. During the pupal stage, structures of the adult moth form within the pupal case which is shed during eclosion (adult emergence). Adults Adult M. sexta are known as Carolina sphinx moths. M. sexta moths are nectarivorous and feed on flowers, demonstrating a remarkable ability to hover. Adult males and females are sexually dimorphic. Males are identifiable by their broader antennae and the presence of claspers at the end of the abdomen. Female moths are typically ready to mate one week after eclosion, and do so only once. Males may mate many times. Mating generally occurs on a vertical surface at night, and can last several hours, with the male and female facing in opposite positions, their posterior ends touching. After mating, females deposit their fertilized eggs on foliage, usually on the underside of leaves.