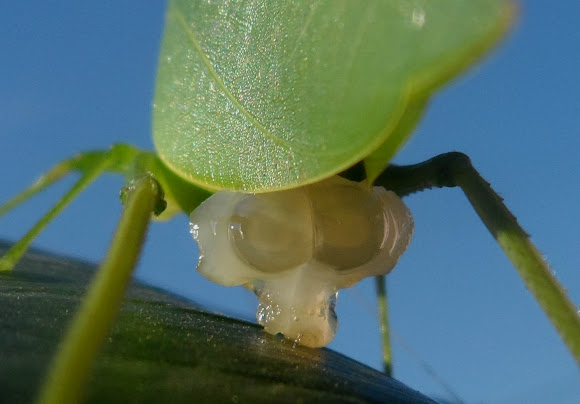 More photos of female with spermatophore, newborn baby and eggs:

This is one insect group where the sounds of the males calling to females are as useful for identification as bird or frog songs. Katydids are generally large insects but they also employ camouflage to hide from predators, so the songs are heard more often than the animals are seen.

Gender is easy to determine on adult katydids, and even older nymphs. The females have an ovipositor, which might be straight, curved, rounded or flat. In some cases it can be very long. Males, of course, lack this structure, but they usually have distinctive shortened appendages (cerci) on their rear that help in identification of different species. The males have modified wings for singing, with the part at the top just behind the pronotum producing the sounds. This area often looks sort of swollen or bumpy. Even the males of short-winged species have enough there to produce their calls.

Katydids produce their songs by means of stridulation: rubbing a file-like structure of one wing against the scraper of the other to make trilling, chirping, or buzzing sounds. When males sing, it looks like their wings puff up just a bit and vibrate like crazy. They tend to stop singing if they feel threatened, so it is necessary to sneak up on them to watch. The ears of katydids are located on their front legs, and are easy to see on large individuals. Mating appears to be quite secretive in katydids, unlike grasshoppers, which are often found coupling. However, when they mate, the male transfers a large jelly-like mass called a spermatophore to the female. This has two parts: a small packet of sperm which is inserted into the female followed by a larger glob of nutritious gel, a nuptial gift that the female consumes to help with egg production. This white glob is easily seen attached to recently mated females.

The eggs of katydids are not commonly found. They are sometimes buried in soil or inserted in leaves and stems of plants. However, the eggs of some species are laid in rows on the surface of twigs. These look like flattened gray oval buttons aligned in two rows along a tree twig. When the eggs hatch, they open like an oyster, separating at the seam along the edge. Empty eggs resemble a row of little bivalves.

Thanks again, lauren. thanks, Smith Zoo