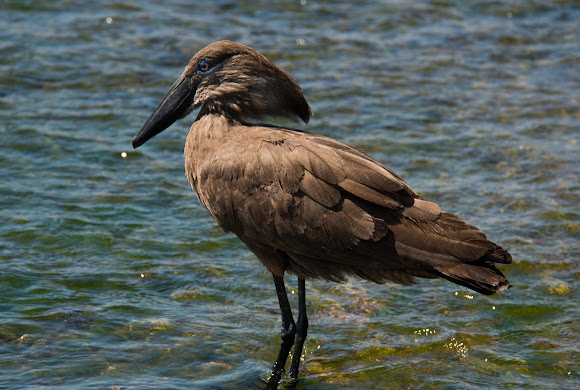 A medium-sized wading bird 56 centimetres (22 in) in length with a weight of 470 grams (17 oz). The shape of its head with a long bill and crest at the back is reminiscent of a hammer, hence its name. It ranges from Africa, Madagascar to Arabia, in wetlands of a wide variety, including estuaries, lakesides, fish ponds, riverbanks and rocky coasts.

The hamerkop's behaviour is unlike other birds. One unusual feature is that up to ten birds join in "ceremonies" in which they run circles around each other, all calling loudly, raising their crests, fluttering their wings. Another is "false mounting", in which one bird stands on top of another and appears to mount it, but they may not be mates and do not copulate. The strangest aspect of hamerkop behaviour is the huge nest, sometimes more than 1.5 metres (4 ft 11 in) across, comprising perhaps 10,000 sticks and strong enough to support a man's weight. The birds decorate the outside with any bright-coloured objects they can find. When possible, they build the nest in the fork of a tree, often over water, but if necessary they build on a bank, a cliff, a human-built wall or dam, or on the ground. A pair starts by making a platform of sticks held together with mud, then builds walls and a domed roof. A mud-plastered entrance 13–18 centimetres (5.1–7.1 in) wide in the bottom leads through a tunnel up to 60 centimetres (24 in) long to a nesting chamber big enough for the parents and young. It is known in some cultures as the lightning bird, and the Kalahari Bushmen believe or believed that being hit by lightning resulted from trying to rob a hamerkop's nest. They also believe that the inimical god Khauna would not like anyone to kill a hamerkop. According to an old Malagasy belief, anyone who destroys its nest will get leprosy, and a Malagasy poem calls it an "evil bird". Such beliefs have given the bird some protection.

Most pics make this bird look cumbersome and ungainly with the head, but you have truly caught the beauty and majesty of this beautiful creature

Thank you Ava :) I am sorry to say that I never took any photos of the nest. But they can easily be mistaken for eagle nests. Sometimes they are even used by the Fish Eagle as a temporary feeding place. (you can tell by the smell of fish)

Beautiful series and wonderful notes! I don't suppose you have a picture of a nest you could post.