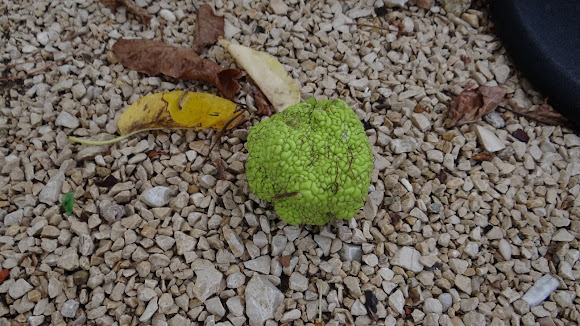 The trees range from 40–60 feet (12–18 m) high with short trunk and round-topped head. The juice is milky and acrid. The roots are thick, fleshy, covered with bright orange bark. The leaves are arranged alternately in a slender growing shoot 3–4 feet (0.91–1.2 m) long, varying from dark to pale tender green. In form they are very simple, a long oval terminating in a slender point. In the axil of every growing leaf is found a growing spine which when mature is about 1 inch (2.5 cm) long, and rather formidable. The pistillate and staminate flowers are on different trees; both are inconspicuous; but the fruit is very much in evidence. This in size and general appearance resembles a large, yellow green orange; only its surface is roughened and tuberculated. It is, in fact, a compound fruit such as botanists call a syncarp, in which the carpels (that is, the ovaries) have grown together; thus, the great orange-like ball is not one fruit but many. It is heavily charged with milky juice which oozes out at the slightest wounding of the surface. Although the flowering is dioecious, the pistillate tree even when isolated will bear large oranges, perfect to the sight but lacking the seeds. Bark: Dark, deeply furrowed, scaly. Branchlets at first bright green, pubescent, during first winter they become light brown tinged with orange, later they become a paler orange brown. Branches with yellow pith, and armed with stout, straight, axillary spines. Wood: Bright orange yellow, sapwood paler yellow; heavy, hard, strong, flexible, capable of receiving a fine polish, very durable in contact with the ground. It has a specific gravity of 0.7736 and 1 cubic foot (0.028 m3) of the wood has a weight of 48.21 lb (21.87 kg). Winter buds: All buds lateral. Depressed-globular, partly immersed in the bark, pale chestnut brown. Leaves: Alternate, simple, 3–5 inches (7.6–13 cm) long, 2–3 inches (5.1–7.6 cm) wide, ovate to oblong-lanceolate, entire, acuminate, or acute or cuspidate, rounded, wedge-shaped or subcordate at base. Feather-veined, midrib prominent. They come out of the bud involute, pale bright green, pubescent and tomentose, when full grown are thick, firm, dark green, shining above, paler green below. In autumn they turn a clear bright yellow. Petioles slender, pubescent, slightly grooved. Stipules small, caducous. Flowers: June, when leaves are full grown; dioecious. Staminate flowers in racemes, borne on long, slender, drooping peduncles developed from the axils of crowded leaves on the spur-like branchlets of the previous year. Racemes are short or long. Flowers pale green, small. Calyx hairy, four-lobed. Stamens four, inserted opposite lobes of calyx, on the margin of thin disk; filaments flattened, exerted; anthers oblong, introrse, two-celled; cells opening longitudinally; ovary wanting. Pistillate flowers borne in a dense globose many-flowered head which appears on a short stout peduncle, axillary on shoots of the year. Calyx, hairy, four-lobed; lobes thick, concave, investing the ovary, and inclosing the fruit. Ovary superior, ovate, compressed, green, crowned by a long slender style covered with white stigmatic hairs. Ovule solitary. Fruit: Pale green globe, 4–5 inches (10–13 cm) in diameter, made up of numerous small drupes, crowded and grown together. These small drupes are oblong, compressed, rounded, often notched at the apex. They are filled with milky, latex-based juice. The seeds are oblong. The fruit is often seedless, and floats.[6]

You're in my neighborhood :) this is not our native species, it grows in parks like ornamental plant...