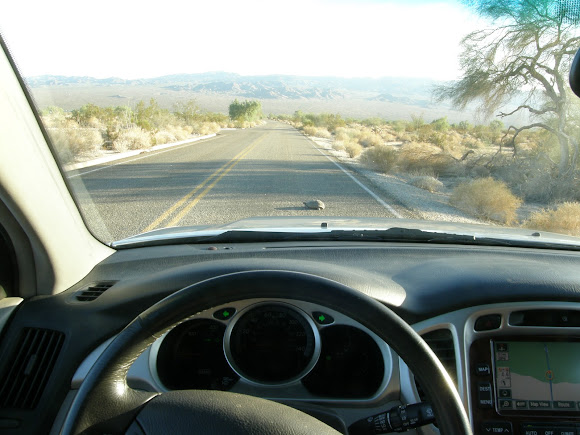 Be cautious while driving through the California Deserts, since tortoise sometimes need to cross roadways. Check under parked vehicles before driving off, since tortoise seek shade under them. Locally one of the biggest threats to tortoise are an unnatural increase in predator ravens. Increasing habitat destruction from community growth and renewable energy's demands on desert acreage aren't helping. The species is threatened with extinction, and it's protected by the Endangered Species Act. So interfering at all with a tortoise is illegal. In this circumstance, I picked up the tortoise just high enough to get it over the curb and to safety on the side to the street where the tortoise was intending to travel. Many parts of JOTR now have intentional depressions in curbs (tortoise width) to prevent tortoise from be trapped on roadways.

Colorado Subdivision of the Sonoran Desert