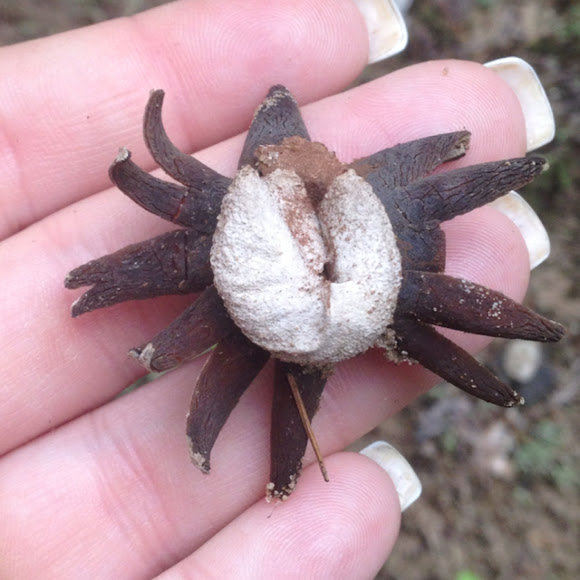 Astraeus hygrometricus, commonly known as the hygroscopic earthstar, the barometer earthstar, or the false earthstar, is a species of fungus in the Diplocystaceae family. Young specimens resemble a puffball when young and unopened. In maturity, the mushroom displays the characteristic earthstar shape that is a result of the outer layer of fruit body tissue splitting open in a star-like manner. The false earthstar is an ectomycorrhizal species that grows in association with various trees, especially in sandy soils. A. hygrometricus has a cosmopolitan distribution, and is common in temperate and tropical regions. Its common names refer to the fact that it is hygroscopic (water-absorbing), and can open up its rays to expose the spore sac in response to increased humidity, and close them up again in drier conditions. The rays have an irregularly cracked surface, while the spore case is pale brown and smooth with an irregular slit or tear at the top. The gleba is white initially, but turns brown and powdery when the spores mature. The spores are reddish-brown, roughly spherical with minute warts, measuring 7.5–11 micrometers in diameter. Despite a similar overall appearance, A. hygrometricus is not related to the true earthstars of genus Geastrum, although historically, they have been taxonomically confused. The species was first described by Christiaan Hendrik Persoon in 1801 as Geastrum hygrometricus. In 1885, Andrew P. Morgan proposed that differences in microscopic characteristics warranted the creation of a new genus Astraeus distinct from Geastrum; this opinion was not universally accepted by later authorities. Several Asian populations formerly thought to be A. hygrometricus were renamed in the 2000s once phylogenetic analyses revealed they were unique Astraeus species, including A. asiaticus and A. odoratus. Research has revealed the presence of several bioactive chemical compounds in the fruit bodies. North American field guides typically rate A. hygrometricus as inedible.