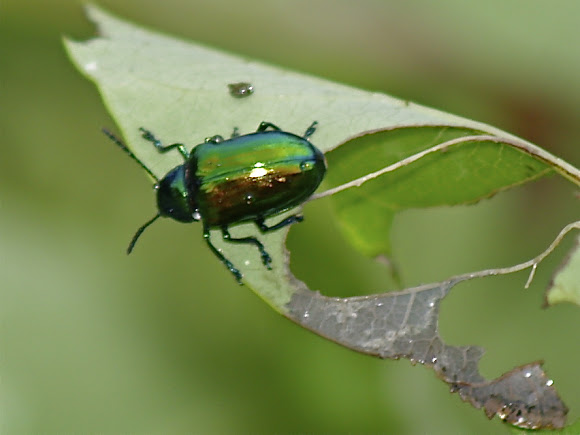 Adult dogbane beetles are distinctly colored, iridescent blue-green chrysomelids with elytra that have a copper shine. The antennae and legs are a bluish-black. The head and thorax have sporadic punctures that are deep and minute. They have long, 12-jointed, filiform antennae that are located between the eyes and frontal ridge. The mandibles are blunt and built for a herbivorous diet. The left is longer than the right and fits into a groove in the right. Their large hypopharynx is thought to be an adaptation to lapping the juice of milkweed plants. Larvae have a white body and brown head.

Dogbane beetles are found in areas where host plants live. They feed and live mainly on dogbane plants (Apocynaceae), especially Indian hemp (Apocynum cannabinum) and spreading dogbane (A. androsaemifolium). Indian hemp, often regarded as a weed, can be found throughout the entire United States in various soil types. It prefers open habitats where it can spread, such as roadsides, fields, railroad tracks, lakeshores, and disturbed areas. Spreading dogbane is found in the northeastern United States. This plant also spreads easily and can survive in a number of habitats. It prefers forests, forest edges, streambanks, and fields with sandy or gravelly soils.