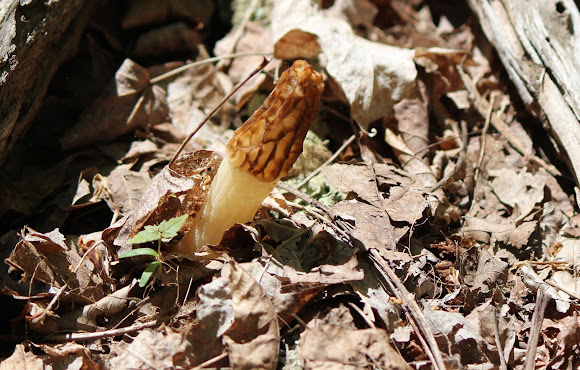 true morels, is a genus of edible mushrooms closely related to anatomically simpler cup fungi. These distinctive mushrooms appear honeycomb-like in that the upper portion is composed of a network of ridges with pits between them.

April–May time frame,Morels are most commonly found in forested areas around dead elm trees, Sycamore, apple trees, under wood scraps and Ash trees, but can also be found in other areas. They often tend to grow under objects on the ground as well because of the dampness under them

Delicate and elusive, morels are a gourmet prize that were once limited to those willing to muck around in the forest in search of these harbingers of spring. Today they are often found at farmers markets and specialty stores. They are fragile, highly perishable, and resist cultivation, so they tend to be pricey. When gathering morels, care must be taken to distinguish them from the poisonous false morels, including Gyromitra esculenta, Verpa bohemica, and others. Although the false morels are sometimes eaten without ill effect, they can cause severe gastrointestinal upset and loss of muscular coordination (including cardiac muscle) if eaten in large quantities or over several days in a row. They contain a gyromitrin-like toxin (an organic, carcinogenic poison) that is produced by the mushroom.