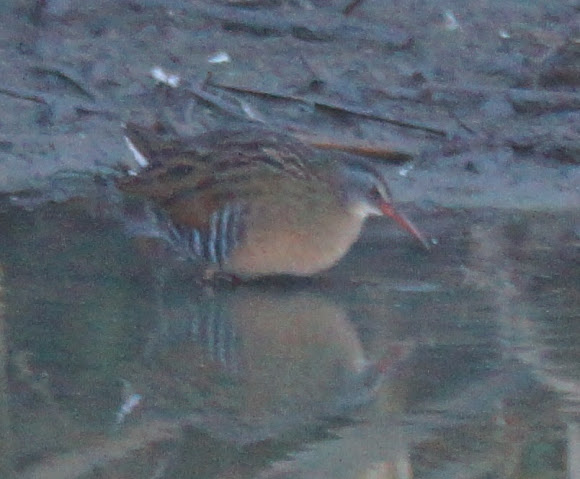 This is one of the Rails found in the Bay Area. A elusive bird, it hides out most of it's time in the vegetation in marshes. In this park they sometimes can be spotted early in the morning or at dusk. A smaller of the rails it can sometimes be mistaken for a Clapper Rail which is bigger. The Virginia Rail has compact body with grey cheeks, long reddish curved bill, short tail and distinctive markings along the flanks. The back is reddish brown with streaks. Here in this park the rails are favorite food to many birds of prey in particular the Northern Harrier.

Spotted about 5 at the edge of the reeds. Last image this one was following the slough just below my feet.

Sorry I forgot to mention that the picture looks worse not only was taken too early in the morning but I removed my extender on my zoom not knowing I was going to spot these.

Great. I was near the Dam at Lake Del Valle and first I hear about 3 Virginia Rails while photographing Dragonflies and Dasmelflies in a swampy area. I took a rest by a small pond and heard a plop in the water out of my sight and out flies one Virginia Rail over the pond, close to me and into some recently cut Pampas Grass. It surprised me so much I didn't get a chance to take a picture. I tried finding it but it must have moved out of the grass quickly.

I used to conduct protocol-level presence/absence surveys for both clapper and black rails in the San Francisco Bay area. In more brackish wetlands areas, especially near the Benicia Bridge, I have heard black rails, Virginia rails, and soras all calling at the same time.

We also have the Clapper Rail and Black Rail. The Clapper Rails are not located in this park but mostly found in Arrowhead Marsh (East Bay Regional Park) and the Black Rail was spotted in Martinez Shoreline. The Clapper Rail at the Arrowhead is use to people so sometimes they come out more then the other two. The Black Rail many heard and only a few have seen so I know how you feel. I also wish someone would come out with something like an app that can ID by the call.

I have heard many of these over the years, but have only observed a few. They often call in response to simply clapping your hands once or twice. It's too bad we can't submit spottings on this site without a photo, especially for those species that are glimpsed only briefly or can typically only be detected by their calls.