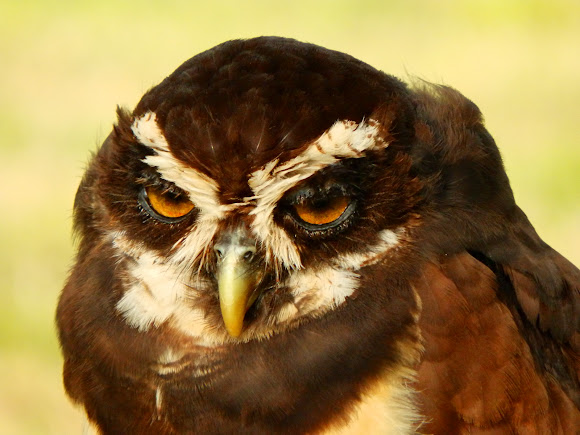 This is Fientje an spectacled owl that lives in captivity and forms part of a raptor flying exhibit, here in Belgium (http://www.uilenhof.be/old/). In the wild these owls are in fact located in tropical areas, mostly in Central and North America. The Spectacled Owl is characterized by brown upperparts, head and upper breast, white facial markings and whitish to yellowish-ochre underparts. The eyes are yellow and the beak is pale. This species is largely nocturnal, starting activity right around the time of last light at dusk and usually being back on their roosts for the day around first light. It is a solitary, unsocial bird, usually roosting singly each day and only peaceable associating with others of their own species for reproductive purposes.

In its natural habitat is found mostly in areas where dense, old-growth forest is profuse. However, it may enter secondary habitats, such as forest edges, especially while hunting. On occasion, they have been found in dry forests, treed savanna plains, plantations and semi-open areas with trees.

Thanks Tamil, Mona and Tiz! I thought they were really beautiful the day I saw them at the exhibit. I will post a few more birds from that day later one :-)

Gorgeous, and you have even more fantastic owl-spottings! wow!