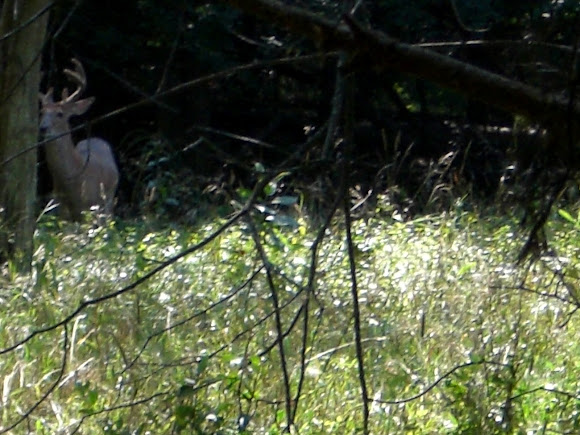 "White-tailed deer, the smallest members of the North American deer family, are found from southern Canada to South America. In the heat of summer they typically inhabit fields and meadows using clumps of broad-leaved and coniferous forests for shade. During the winter they generally keep to forests, preferring coniferous stands that provide shelter from the harsh elements. Adult white-tails have reddish-brown coats in summer which fade to a duller grayish-brown in winter. Male deer, called bucks, are easily recognizable in the summer and fall by their prominent set of antlers, which are grown annually and fall off in the winter. Only the bucks grow antlers, which bear a number of tines, or sharp points. During the mating season, also called the rut, bucks fight over territory by using their antlers in sparring matches." -National Geographic

Found in mixed forest near swamp.

This looked like a middle-aged buck, healthy and not injured.