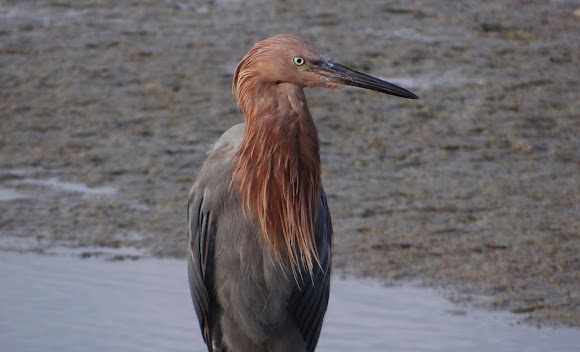 "Reddish egrets grow to a height of 27 to 32 inches (68 to 82 cm), with a wingspan reaching 46 to 49 inches (116 to 124 cm). Their distinguishing characteristics include two distinctly different color phases: a dark phase and a white phase. Reddish egrets in the dark phase are gray with a reddish head and neck feathers. They have bluish legs and a pink bill with a dark tip. In the white phase, these birds will have white feathers, bluish legs, a pink bill with dark tip, and long shaggy plumes on their heads and necks during breeding season." (Texas Parks & Wildlife)

Reddish egrets are most often found in salt and brackish water wetlands.

I believe this is a juvenile. "The reddish egret can be found along the Gulf Coast of Texas and some parts of Louisiana and southern Florida. It is rare along the Gulf Coast of Mexico, West Indies and Baja California. Until the late 1800s, reddish egrets were hunted for their feathers, which were used to decorate ladies' hats and clothing. The entire United States population of reddish egrets was nearly exterminated by hunters. The reddish egret completely disappeared from Florida. In 1918, the Migratory Bird Treaty Act was passed, finally protecting reddish egrets and other birds from plumage hunters. Although their populations are still recovering, it is a slow process. There are only 1,500 to 2,000 nesting pairs of reddish egrets in the United States - and most of these are in Texas. Intrusion of habitat by recreationists, pesticide runoff and land development all harm the reddish egret's habitat." (Texas Parks & Wildlife)