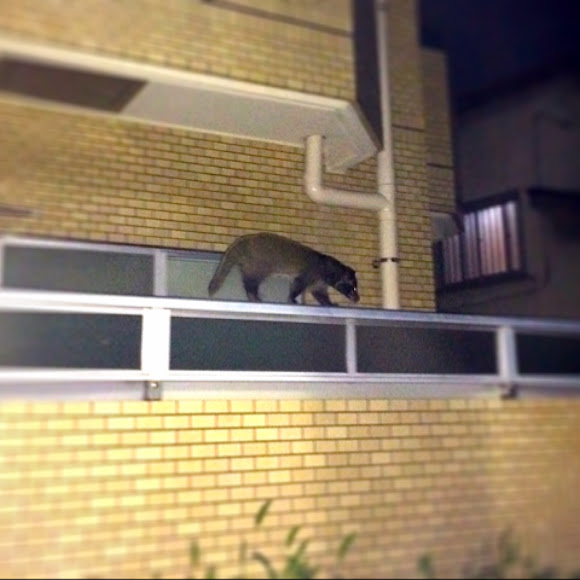 In morphology, the masked palm civet resembles other palm civets, but does not have spots or stripes. Its fur is reddish to grey, and it has a black and white facial mask. Its tail is more than two-third the length of head and body. The mask consists of a prominent white stripe stretching from nose to forehead (sometimes extends farther but has greatly reduced thickness) that halves a black mask that extends laterally to the far edges of the cheeks and caudally up the forehead, past the ears, and down the back of the neck before stopping just under the shoulder blades. The eyes are surrounded by white fur that can vary from faint, incomplete outlines to well-defined blotches. The lips, chin, and throat are white. In some, white stripes of fur, comparable to sideburns on humans due to shape and location, curve up from the throat. These curves vary in thickness and have ends that terminate either in small blotches at the ear base or large blotches that surround the base of both darkly furred ears.

The masked palm civet is distributed from the northern parts of the Indian Subcontinent, especially the Himalayas, ranging eastwards all the way across Bhutan, Myanmar, Laos, Cambodia, Peninsular Malaysia, China, Thailand and to Vietnam. It is also found on Borneo, Sumatra, Taiwan, and the Andaman and Nicobar islands. It has been recorded in both evergreen and deciduous forest, and in disturbed habitat. It also inhabits fragmented forest habitats, albeit at reduced density.

It is unclear whether it is a native to the Japanese islands or was introduced by humans. This one was spotted in Shinjuku, Tokyo - as urban a place as you could imagine.

Mark56 a year ago

Just seen one of these climbing up my neighbour's drainpipe and banging around on their balcony, completely unfazed by my torch. We live 5 minutes from Shibuya, pretty urban.

Nice spotting Colin. You are invited to add it to the mission - Biodiversity of Central Japan, along with any other spottings you may have from this area....
http://www.projectnoah.org/missions/1589...

That is certainly impressive. They must be very adaptable.... http://www.nies.go.jp/biodiversity/invas...

Not a tanuki, but a masked palm civet. Had no idea that anything like that could be found in Tokyo.

Is it common to see them in urban environments? Could you please add the scientific name? Thanks!