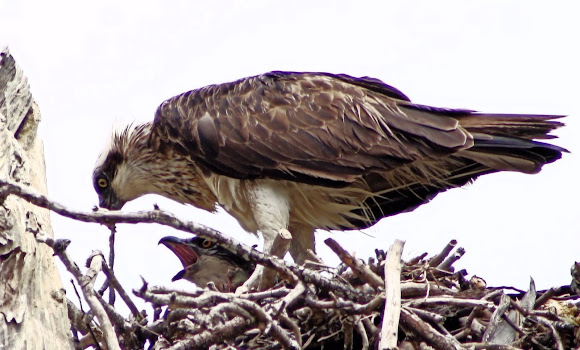 The Osprey is a medium-sized fish-eating raptor (bird of prey). It has dark brown upperparts contrasting with pale underparts. There is a black band through the eye, separating the white throat from the pale crown. The Osprey has a rather small head and neck and typically swivels its head around or sways its head from side to side. When it is perched, there is a short bristly crest. The eyes are placed well forward on the head. The fingered wings in flight are narrow and angled distinctively. There are dark carpal patches on the underwing (at the bend in the wing). The beak is strongly hooked and the legs are powerful. The female is similar to the male but is larger and has a fuller, darker breast band. The Osprey is also called the Fish Hawk or White-headed Osprey.

Ospreys are found on the coast and in terrestrial wetlands of tropical and temperate Australia and off-shore islands, occasionally ranging inland along rivers, though mainly in the north of the country.

Spotted in Hervey Bay in tree a few hundred meters from the beach. There appeared to be two juveniles & one adult bird.

Thanks a lot mary!

Thanks! We just happened to spot the nest as we were driving past then on closer inspection i realised that not only were there juveniles inside but they were being fed! Right place at the right time!

Wow thats incredible! How did you get those shots?

Thanks a lot Mac! I'm very proud of it

Thanks Mark! It certainly was! It's something i've never seen before & probably never will again which makes it all the more special

Super series. What a thrill to watch.

I'm not sure how old ospreys are before they catch their own food but these two looked quite large!