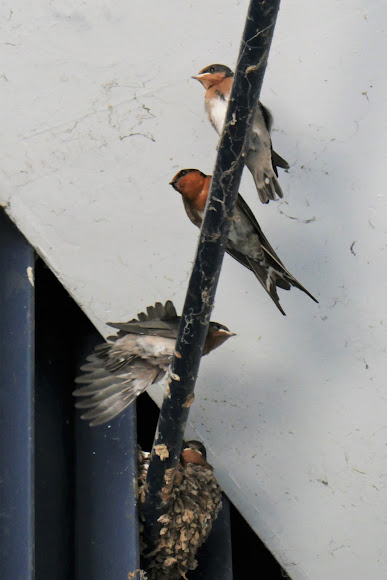 The "welcome swallow" (Hirundo neoxena) is a small passerine bird in the swallow family Hirundinidae, and is an Australian native species. It was also self-introduced into New Zealand in the middle of the twentieth century. For two of the four chicks in this spotting, this was the day of fledging. I returned later that afternoon to find only two chicks left in the nest, being attended to by an adult. There's loads of information about the species at the references, but what I want to highlight here is the potential risk associated with certain bird species, particularly around their nests and droppings. In swallow’s excreta, there are various kinds of harmful bacteria and parasites, so take care! (SEE NOTES!)

Spotted high above at the entrance to a service building, at the Metroplex on Gateway estate, Murarrie, Brisbane. The Metroplex wetlands are only a stone's throw from this location, and as these birds are aerial insectivores, this area has great appeal. Fresh water, bright lights, heaps of insects, much to the swallow's delight. This species breeds in southern and eastern Australia in a variety of habitats, mostly in open areas, man made clearings or urban environments, but not desert or dense forest. Eastern populations are largely migratory, wintering in northern Australia, whereas western birds and those in New Zealand are mainly sedentary.

This is an interesting, albeit brief article, that highlights the potential hazards faced by predators and humans in relation to swallows and their nests, and the diseases they can be exposed to: https://www.australiangeographic.com.au/... To quote: "....these little birds build their nests with the inevitability of a snake attack in mind – all kinds of horrendous diseases and bacteria await any would-be predator that’s foolish enough to stick its snout inside. There’s the potentially fatal fungal disease, histoplasmosis, and encephalitis, which can cause an acute infection in the brain. There’s salmonella, meningitis, toxoplasmosis, and even fowlpox, which can harm the swallow itself. Lucky for the hatchlings, which have no choice but to squirm around in all that filth, evolution appears to have given them a booster shot of white blood cells from their time in the egg...." It just goes to show that every species has developed its own unique defense against predators, and once again, "look but don't touch" seems to be our best line of defense. These birds have developed an immunity to these diseases over time, whereas we have not. Even picking up an injured chick poses a risk, so be mindful and always wash your hands after contact, and that might also include your clothing.

Thanks, Tukup. I thought we'd get a chance to clean up their mess. No one counted on the chicks returning to the nest.

Thanks, Brian. I've always liked these birds. They're pretty nasty though. I'll be back onboard soon to check out your latest spottings.