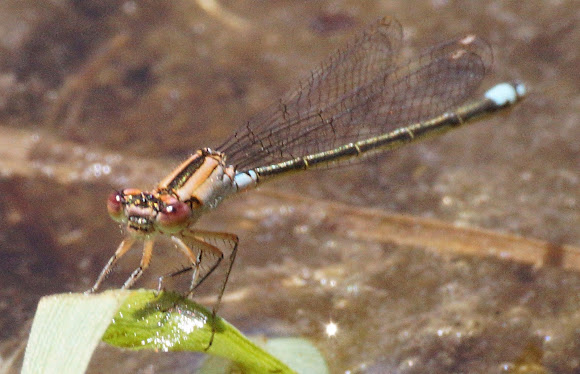 The male Plains Forktail looks fairly similar to the Pacific Forktail. And where they share the same location could only separated by looking at the appendage at the end of the abdomen. The male has green-blue undereyes with a dot of blue on the top. On the thorax there are four blue dots and a wide blue stripe at the top of the sides, which are almost solid blue. The abdomen is dark on top and light below. The females can vary in description. All the photos on this spotting are female. The first two images are of heteromorphic females, which is mostly normal females. The eyes are oval shaped and reddish orange. The legs, head and thorax also are a reddish orange. She also has a very colorful middorsal stripe. The other images show an andromorphic female, which look more like immature males. The last image is of an older female which they can become darker in color.