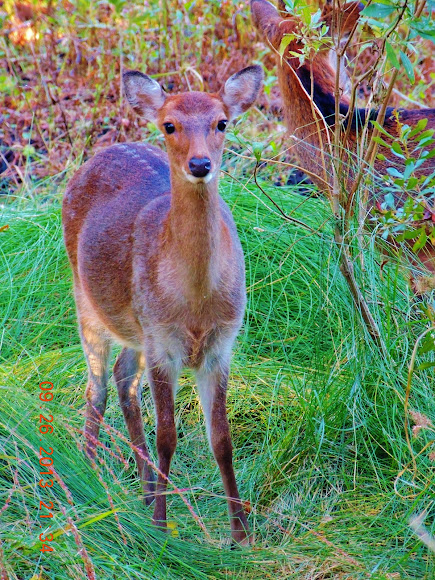 The Sika Deer were Introduced on Assateague Island during the mid 1920's, Sika can been seen in the loblolly pine forest, sand dune areas and marshes along Assateague. Although smaller than whitetail deer, these animals exhibit elk-like behavior. Often called "Asian elk", they sometimes offer visitors a chance to witness exciting physical challenges between males during the sika's mating season. Sika eat the leaves of myrtle bushes, grasses, persimmons, shrubs, and other plants on Assateague Island. They even eat poison ivy. Sika are highly vocal and at least ten different sounds have been recorded. There are several subspecies and their fur can range in color from chestnut-brown with reddish hair on top of the head to a dark brown or black They have white spots on their backs which appear more visible during different seasons. Scientists are still trying to figure out how many subspecies exist, but currently recognize six to 14 kinds of sika.

These sika deer (female and male) were spotted in a pine forest on Assateague Island National Seashore, Ocean City, Maryland.

Sarah--your question about "why were the sika deer introduced" to Assateague Island. After further research, I think they were put there for hunting them. I did not want to find this reason but such is life. They have two days for hunting the white-tailed deer and the sika deer each year. Sad to find this out. Never knew they allowed hunting on this wonderful island. They call it controlled hunting. These two sika deer that I spotted on one of the marsh trails were not afraid of me at all. They just stood there and let me take their picture. A wonderful experience.

sarah in the woods 7 years ago

Fascinating! I've never heard about these. Why were they introduced?

Thank you for the information, mary.gallo.m, always nice when I like but do not know much about the spotting.