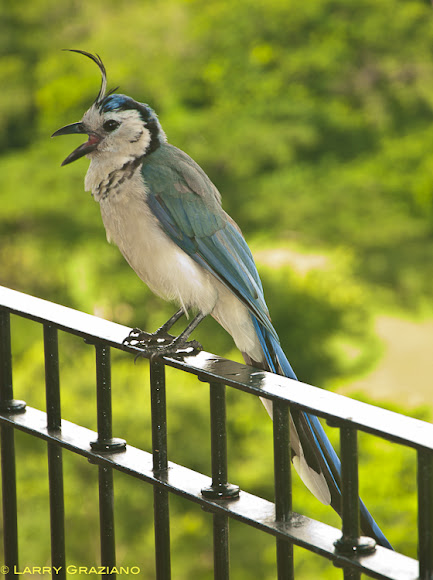 The White-throated Magpie-jay is between 43–56 cm (17–22 in) in length and weighs 205–213 g (7.2–7.5 oz). The species has a particularly long tail, and a slightly curved crest of feathers on the head. The crest is black in the nominate race, but has blue or white margins on the other two subspecies. The nominate race has a white face with a black crown and margin to the face, forming a narrow band around the throat, as well as a small drop below the eye. The black is less extensive in the other subspecies. The breast, belly and underside of the rump are white, and the wings, mantle and tail are blue (with whitish margins on the tail). The legs and eye are black, and the bill is grey. The plumage of the females is mostly as that of the male but duller on the top, with a narrower band across the chest, and the tail is shorter

The White-throated Magpie-jay is associated with a wide range of habitats from arid environments to semi-humid woodlands, from sea-level up to 1,250 m (4,100 ft), although only occasionally higher than 800 m (2,600 ft). It occurs rarely in columnar cacti forest, but is common in thorn-forest, gallery forest, deciduous woodland, forest edges and cultivated areas like coffee plantations. The species does not undertake any migratory movements, although males disperse away from their natal territories a few years after fledging. It is a common species across its range, and is not considered threatened by human activities

Thank you so much James!

Whoah that is awesome. Great info as well!

I'm glad you liked it Marta. I hope to see you the next time you come to Costa! Bendiciones.

Nice! I would have liked to see this bird but I did not yet. That means I have to return to Costa Rica! :-)

Thanks Gilma! I'm glad you enjoyed this shot. They are wonderful birds.

Gorgeous!! I have seen this bird and it is a beautiful sight, it is majestic!!