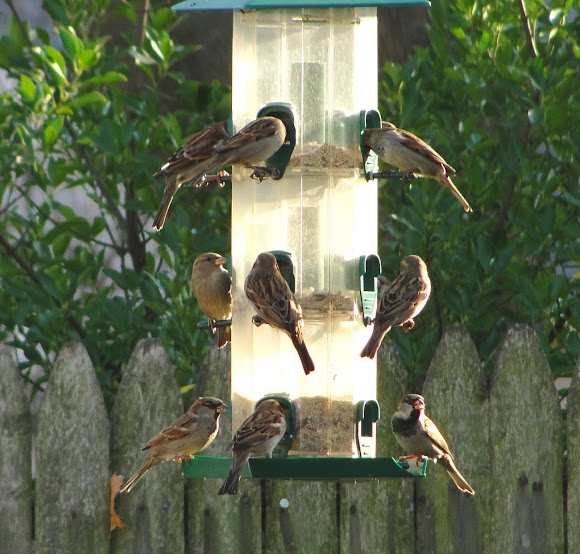 The House Sparrow is a chunky bird, typically about 6 in long, ranging from 5.5–7 in. Weight varies by sex, with females usually smaller than males. Younger birds are smaller, males are larger during the winter, and females larger during the breeding season. The plumage of the House Sparrow is mostly different shades of grey and brown. The sexes differ, with females and juveniles mostly buff, and the male marked with bold colours. In breeding plumage, the male's crown is grey, and it is marked with black on its throat and beneath its crown. The cheeks and underparts are pale grey. The female has no black on head or throat, nor a grey crown and its upperparts are streaked with brown.[The juvenile is deeper brown, and the white is replaced by buff; the beak is pink to dull yellow.

Since the mid-nineteenth century, it has spread throughout much of the world, mostly due to deliberate introductions but also through natural dispersal and shipborne travel. The House Sparrow is closely associated with human habitations and cultivation. The only habitats in which the House Sparrow is not found are dense forest and tundra.

As an adult, the House Sparrow mostly feeds on the seeds of cereals and weeds, but it is opportunistic and adaptable, and eats whatever foods are available. The House Sparrow also eats berries and fruits, and it can survive without water in arid areas by ingesting moisture from berries. Another important part of the House Sparrow's diet, chiefly insects, of which beetles, caterpillars, flies, and aphids are especially important.