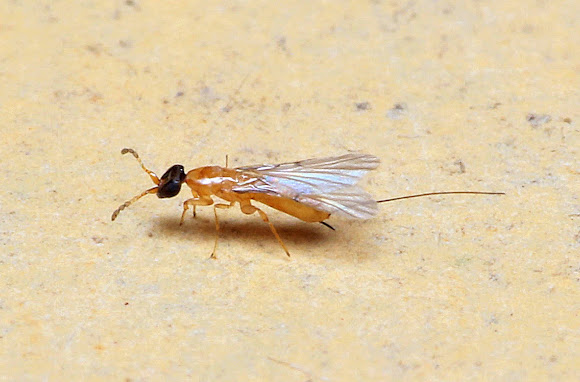 A parasitic fig wasp at about 4mm long (ovipositor included). Escaped from a male fruit of the Cuming's Fig (Ficus cumingii). This is a parasitic wasp which does not pollinate the figs as it does not need to enter the fruits. Since the females have long ovipositors, she can easily inject her eggs directly into the fig from outside. Only fig wasps which enters fig fruits are beneficial parasites while fig wasps with long ovipositor like these are parasitic and does not bring any benefit to figs.

Found after cutting open a male Cuming's fig fruit. Ficus cumingii is a common fig species from Philippines which have successfully arrived the east coast of Sabah, Borneo and slowly becoming abundant in the urban areas. This species is unique where it has some leaves that are growing opposite to each other which is unlike all the other fig species. Although this photo shows the side of the plant which have non-opposite leaves instead. Leaves are are very rough with tiny hard hairs.

The first photo is from Shavez Cheema, my colleague from 1StopBorneo Wildlife.