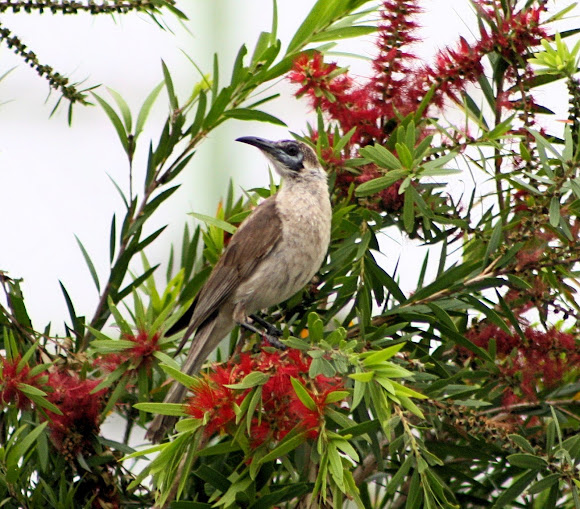 The Little Friarbird is the smallest of the friarbirds, with a medium, curved bill with no casque (a bump, characteristic of other friarbirds) and a squared off tail when spread. It is brown-grey above, paler grey on neck and collar, with a distinctive bare blue-grey face patch, and pale greyish white below with fine white streaking on the breast. Females are slightly smaller, but otherwise similar. Young birds are browner above, with more yellowish colourings on chin and throat. It is a conspicuous and noisy bird, often chasing other honeyeaters, and is mostly seen higher up in trees.

The Little Friarbird is found near water, mainly in open forests and woodlands dominated by eucalypts. Also found in wetlands, monsoon forests, mangroves and coastal heathlands. Only extend into arid zone along waterways. Mostly tropical, but also common in semi-arid zone. It will also be seen in gardens and orchards.

Spotted feeding on Callistemon beside a petrol station.

Yeah i had a go but i don't think i'd ever be able to work it out. I'll just have to go with the genus

Sorry I wouldn't be game. There's so many cultivars these days.

Yeah i got really lucky with that! Mark any idea what species of Callistemon this is?

Wow! Looks amazing with the flowers too

Thanks shanna and daniele! I was sitting at a gas station and happened to see it out the window!

Lovely pictures Alice. A natural combination of Friarbird and Callistemon.