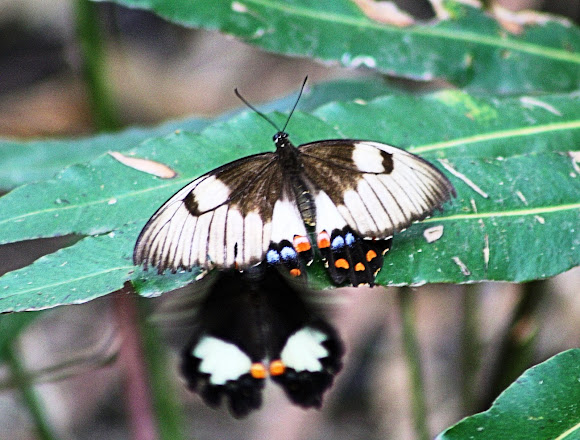 Both male and female have black forewings with a white stripe, though there is more white overall on the female forewing. The hindwing is again black, and there is a white swath through the middle. Here the markings differ in that the female has chains of red to orange and blue crescents toward the edge. The markings on the underside are similar to those on top. The body is black.The wing-span is about 140mm in females and 120mm in males, making it rather large overall and the largest butterfly commonly seen in at least part of its range. Despite being a swallowtail, which group derives its name from the distinctive tails on the hindwing, this characteristic is entirely absent.

Papilio aegeus can be found in every state in Australia except Tasmania and Western Australia, but it is generally found in eastern Australia. It is especially common in Queensland and is the largest butterfly commonly found in Brisbane[3] where there are many citrus trees, on which the larvae feed.[4] During summer, the distribution is temporarily extended to Victoria.

Thanks for the confirmation shanna! I didnt manage to get the male stationary but he had more important things on his mind!

I think the ID is correct. http://www.brisbaneinsects.com/brisbane_... Great spotting, it is so difficult to catch them at rest...!