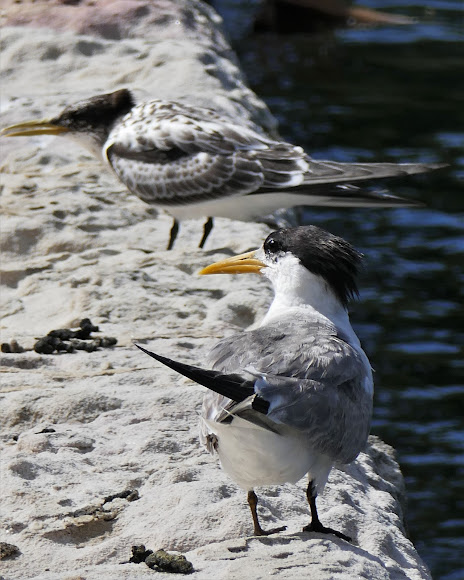 These birds are known as "crested terns" in Australia, and I feel fortunate to have spotted them. Both were birds I wanted to see, and that's just as well because they were the only two around. One is an adult with breeding plumage, and the other is a juvenile with its heavily-mottled or barred plumage. I'd never noticed a juvenile before, nor the adult's breeding plumage. These birds belong to the family Laridae, which also includes gulls and skimmers. During the breeding season, the adult has a distinctive black cap with a long crest, white neck and underparts, and a grey back and upperwing. In contrast, the non-breeding adult has a white crown with limited dark spotting, but its hind-crown remains black. The large bill is greenish-yellow to yellow, and the legs are black. Here's a previous spotting of a crested turn's non-breeding plumage. Honestly, there's not a great deal of difference, although the black cap is noticeably less-defined - https://www.projectnoah.org/spottings/20... There are five subspecies globally, but the local subspecies T.b.cristata, ranges from Australia to PNG, and into southeast Asia. Everything else you could ever want to know about this species can be found at the reference links. Wikipedia is extensive.

Spotted on the sea wall at Bobbin Head, on Cowan Creek. This waterway is a saltwater tributary of the Hawkesbury River and Broken Bay, on the northern outskirts of Sydney. Bobbin Head lies within steep terrain that is heavily wooded, in Ku-ring-gai Chase National Park. Native vegetation runs right down to the rocky shores along the entirety of creek. Cowan Creek is very deep and tidal, and apart from leaf litter and debris from surrounding bushland, is very clean. Many species of fish are abundant. Here's some park info - https://www.nationalparks.nsw.gov.au/thi...

Conservation status is secure in all Australian states and territories, with the exception of Victoria where its status is near threatened (NT).