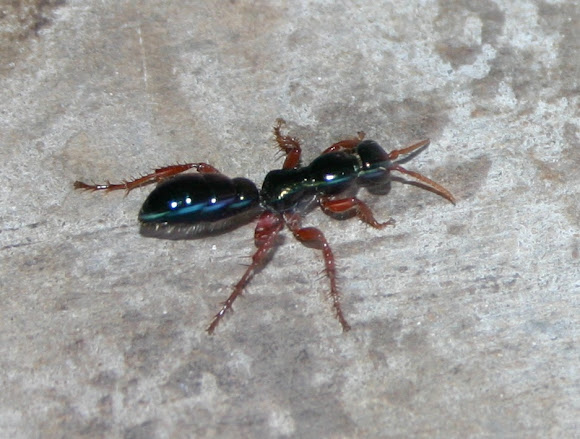 The blue ant (Diamma bicolor, also known as the blue-ant or bluebottle) is, despite its name and its appearance, not an ant at all, but rather a species of large solitary parasitic wasp sometimes known as a flower wasp. It is a native of south and southeast Australia, including the Australian states of Tasmania, New South Wales, Victoria and South Australia. It is the sole member of the subfamily Diamminae, and is both morphologically and behaviorally unusual among members of the family Tiphiidae. Blue ants have a distinctive metallic blue-green body, with red legs. The female ranges up to 25 mm (1 inch) in length, is wingless and ground-dwelling, and exclusively hunts mole crickets, whereas all other species of tiphiids attack beetle larvae. The cricket is paralysed with venom injected by the female's stinger and an egg is laid upon it so the wasp larva has a ready supply of food. The male is smaller, approximately 15 mm (0.5 inches), and has wings. Adults feed on nectar, and pollinate various native Australian flowers. The sting can cause a severe burning sensation and swelling in humans; in rare cases, it can cause a life threatening reaction (such as anaphylaxis).

The Blue Ant is found in urban areas, forests and woodlands

Hi RoseHill, and welcome to Project Noah! Great series, well documented! Just a few tips to help you get started:
- under scientific name, only write the latin binomial name. Project Noah uses this field to classify spottings.
- under habitat: describe the actual habitat where you made the spotting.
- you will need to crop the last image as pictures of people, especially children, are not allowed on Project Noah.
You can find more tips and rules for this site on our faq page. Welcome again!
http://www.projectnoah.org/faq