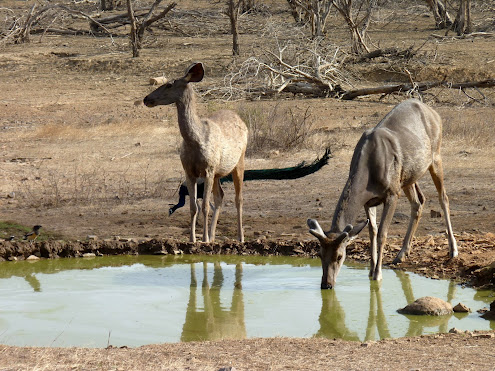 The sambar (Rusa unicolor) is a large deer native to the Indian Subcontinent and Southeast Asia. Although it primarily refers to R. unicolor, the name "sambar" is also sometimes used to refer to the Philippine deer (called the Philippine sambar) and the rusa deer (called the Sunda sambar). The name is also spelled sambur, or sambhur. The appearance and the size of sambar vary widely across their range, which has led to considerable taxonomic confusion in the past; over forty different scientific synonyms have been used for the species. In general, they attain a height of 102 to 160 centimetres (40 to 63 in) at the shoulder and may weigh as much as 546 kg (1,204 lb), though more typically 100 to 350 kg (220 to 770 lb).Head and body length varies from 1.62 to 2.7 m (5.3 to 8.9 ft), with a 22 to 35 cm (8.7 to 14 in) tail.[4] Individuals belonging to western subspecies tend to be larger than those from the east and females are smaller than males.

The sambar inhabits much of southern Asia (as far north as the south-facing slopes of the Himalayan Mountains), mainland Southeast Asia (Burma, Thailand, Indochina, the Malay Peninsula), southern China (including Hainan Island), Taiwan, and the islands of Sumatra and Borneo in Indonesia. Sambar are found in habitats ranging from tropical seasonal forests (tropical dry forests and seasonal moist evergreen forests), subtropical mixed forests (conifers, broadleaf deciduous, and broadleaf evergreen tree species) to tropical rainforests. They are seldom found far from water. They are hardy animals, ranging from sea level up to 3,500 metres (11,500 ft) in places such as eastern Taiwan, Myanmar, and the foothills of the Himalayan Mountains. Sambar prefer the dense cover of deciduous shrubs and grasses, although the exact nature of this varies enormously with the environment, because of their wide range across southern Asia. Home range sizes are probably equally variable, but have been recorded as 1,500 hectares (3,700 acres) for males and 300 hectares (740 acres) for females in India.