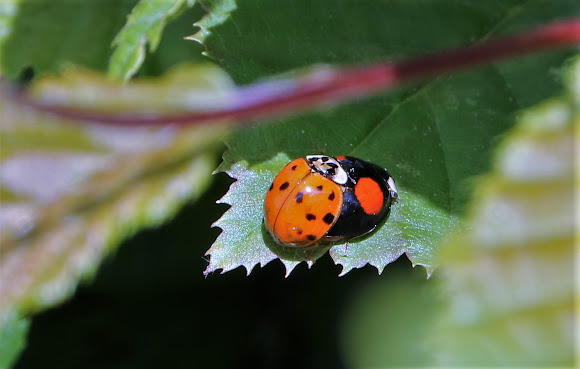 Love season to Ladybirds: here two Harlequins, a highly variable in colors and patterns, a fact to which it owes its English name. These two specimens were were very different; one black with two large red spots, the other one bright orange with about 20 irregular smudges; both with very shiny elitras. Their size is rather large for coccinellid beetle, about 1cm in length; and they sport a highly domed back with "smooth" transition between the dome and head.

The species is native to eastern Asia, but has been artificially introduced to Europe, as auxiliary in agriculture. It is now common, well known, but invasive species and spreading in Europe, but also on other continents. Here observed in local forest like park, at the outskirts of the town center, in lowlands around Geneva lake (lac Leman), just between Alps and Jura mountain ranges.