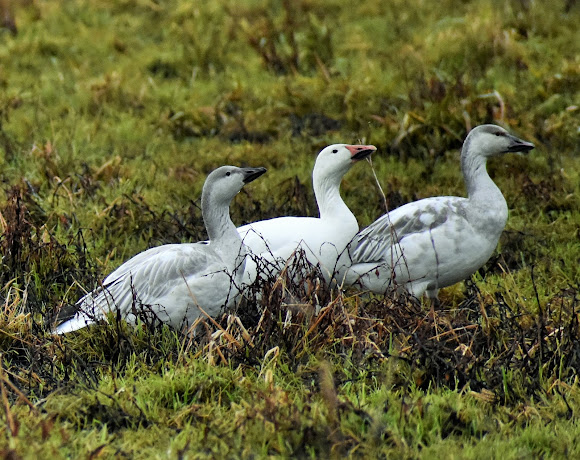 A small flock of four adults, seven juveniles and one White fronted goose. The juveniles have dark bills and legs, while adults are pinkish orange.

Spotted in a farm field with flooded fields and wetlands nearby.

The Snow Goose is a voracious forager, feeding for sustained periods of time in concentrated areas; females forage up to 50% of the day during spring migration and up to 75% on breeding grounds before nesting. On the wintering grounds, where the species is highly gregarious, it often feeds in very large flocks in restricted areas. Its diet consists entirely of plant material, and its primary foraging strategy involves grubbing for underground rhizomes, tubers, and roots, but it also grazes on tender new shoots of aquatic and agricultural plants, and during migration and on the wintering grounds actively scavenges agricultural fields for waste grain. As this species has taken advantage of previously unavailable sources of food on its wintering grounds and along migration routes, the population has increased rapidly—in some areas, as much as 9%/yr (Gauthier and Brault 1998). Increasing populations, coupled with its primary foraging strategy of grubbing, is causing serious damage to its breeding and, in some areas, wintering habitats. Current estimates place its population at between 5 and 6 million, a number that may be environmentally unsustainable. This species is socially monogamous, with life-long pair bonds formed usually away from the breeding grounds during the second year of life. During the breeding season, the species is aggressively territorial, with pairs defending an area of variable size around their nest site; during nonbreeding season, it is highly gregarious and flocking. The family unit is strong, with goslings remaining with the family until mate selection during their second or third year. Mating is assortative; birds in dimorphic populations actively choose mates according to the color of the family in which they were raised. What mixing occurs among nesting colonies occurs as a result of pair formation by birds away from their breeding colonies. As females are strongly philopatric, returning to the same breeding colony each year, there is little movement of females among colonies, but there may be considerable movement of males.