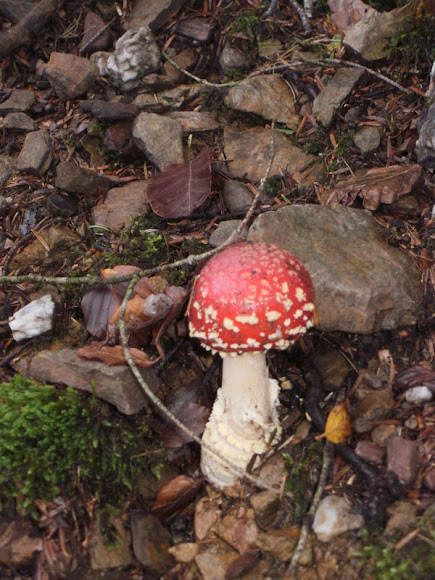 A large conspicuous mushroom, Amanita muscaria is generally common and numerous where it grows, and is often found in groups with basidiocarps in all stages of development. Fly agaric fruiting bodies emerge from the soil looking like a white egg, covered in the white warty material of the universal veil. Dissecting the mushroom at this stage will reveal a characteristic yellowish layer of skin under the veil which assists in identification. As the fungus grows, the red color appears through the broken veil and the warts become less prominent; they do not change in size but are reduced relative to the expanding skin area. The cap changes from globose to hemispherical, and finally to plate-like and flat in mature specimens.[37] Fully grown, the bright red cap is usually around 8–20 cm (3–8 in) in diameter, although larger specimens have been found. The red color may fade after rain and in older mushrooms.

A. muscaria is a cosmopolitan mushroom, native to conifer and deciduous woodlands throughout the temperate and boreal regions of the Northern Hemisphere. Though generally encountered in autumn, the season can vary in different climates