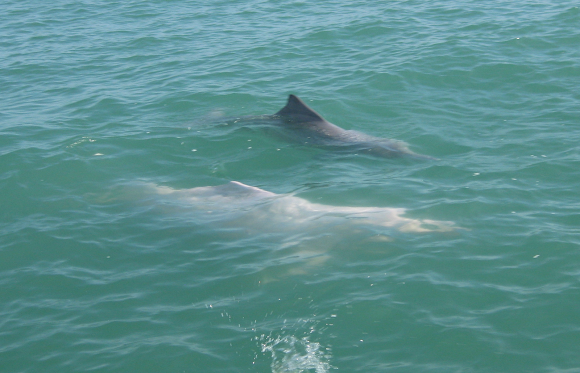 Visibility in the water low. Nearby, large mangrove forests could be seen. Probably one or more river mouths in the proximity.

The animals where seen on a dolphin tour. Unfortunately the animals where attracted by feeding while producing simultaneously loud knocking noises. So that the dolphins would learn to connect the knocking with food. Feeding wild life animals will eventually lead to disturbances in the ecosystem by shifting balances, also the fed animals may loose a significant amount of their ability to survive disturbances in their habitat.

Oh my, that doesn't sound too good. I can imagine it was still amazing but it would be preferable not to attract the animals in that way as it ultimately can endanger them. That kind of information would be useful to put in the notes and habitat sections of a spotting to give viewers more context on what they are seeing. Thanks!

Yes! Totally, but i have to say, that i was sitting in one of several tourist boats where the guides attracted the dolphins with extensive feeding and producing loud noises (knocking) additionally to the motors noise. In my eyes the dolphin tours can improve a lot regarding the ecosystem friendliness. But still, i was amazed!

How exciting to see these aquatic mammals up close!