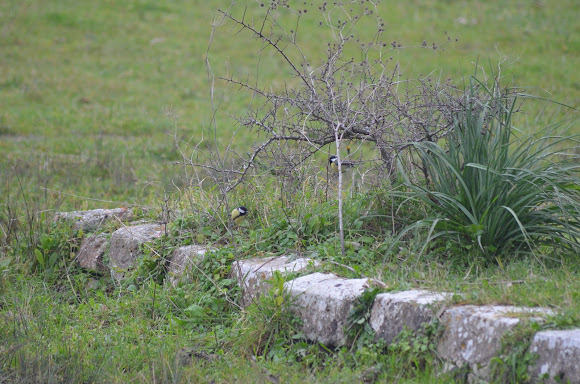 The great tit is large for a tit at 12.5 to 14.0 cm (4.9–5.5 in) in length, and has a distinctive appearance that makes it easy to recognise. The nominate race P. major major has a bluish-black crown, black neck, throat, bib and head, and white cheeks and ear coverts. The breast is bright lemon-yellow and there is a broad black mid-line stripe running from the bib to vent. There is a dull white spot on the neck turning to greenish yellow on the upper nape. The rest of the nape and back are green tinged with olive. The wing-coverts are green, the rest of the wing is bluish-grey with a white-wing-bar. The tail is bluish grey with white outer tips. The plumage of the female is similar to that of the male except that the colours are overall duller; the bib is less intensely black, as is the line running down the belly, which is also narrower and sometimes broken. Young birds are like the female, except that they have dull olive-brown napes and necks, greyish rumps, and greyer tails, with less defined white tips

The great tit occupies a range of habitats. It is most commonly found in open deciduous woodland, mixed forests and forest edges. In dense forests, including conifer forests it is usually found in forest clearings. In Cephalonia island it occupies habitats ranging from dense deciduous and coniferous forests to open areas with scattered trees.