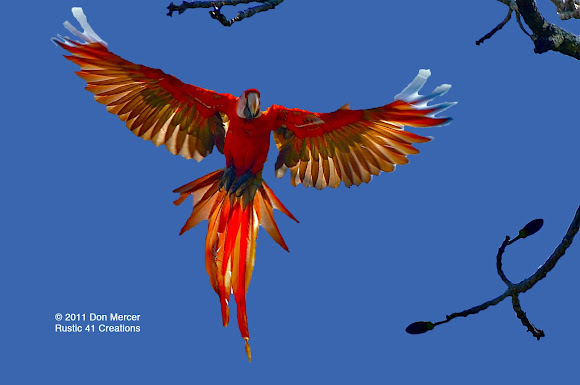 This beautiful parrot is multi-colored: red; yellow; and blue.

From southeastern Mexico, through Central America, and south through much of the Amazon basin in South America.

While on a hike along a beach and up to a couple hundred yards inland on the Osa Peninsula in Costa Rica, my attention was drawn to a small flock of macaws coming from behind. Four peeled off as others continued southward, and they decided to land in a barren tree a hundred yards behind me. I made my way slowly back to an outcropping of rocks and set up my tripod just behind a large rock peering up toward the birds. They seemed oblivious to my presence and jockeyed for the best perch, with some going talon to talon. This was one of over two hundred images that I took while photographing the macaws for the fifteen minutes while they decided to have their fun some thirty feet above. The day could not have been more perfect!

that is a wonderful image

Fantastic!! The time I saw them I was so excited. They are usually so high up in the Almond trees with the same colors as them that it was hard to see them, when they fly they become this gorgeous creatures just as your picture. Thanks for sharing, Rustic 41.