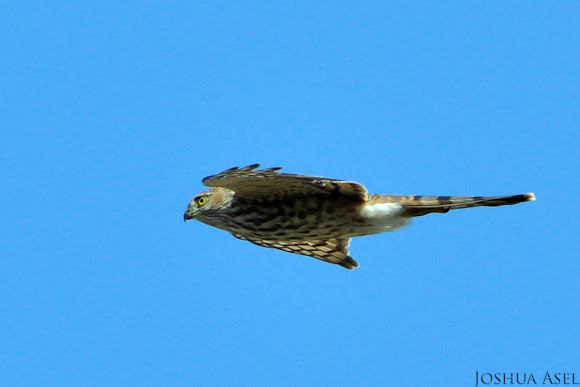 Sharp-shinned hawks are often mistaken for Cooper's Hawks, and vise versa, because of their almost identical shape and feather patterns from juvenile to adult. The differences? Sharpies, as we like to call them, are noticeably smaller, their heads are round and their wrists are much more "wristy" if you will, and the ends of their tail feathers are more flat and squared. As opposed to the Cooper's which are bigger, head more rounded and protrudes further past wrists, wrists not as pronounced, and the tail is long with shorter outer feathers.

Juvenile Sharp-shinned Hawk. I saw not one, but two of these guys in Bodega Bay today. They were flying together for a time. One of them went speeding past me not 10 feet away. Even though I saw them a few times, they were so fast, and mostly far away, this was the only decent picture I could get. :) Migration season is at it's peak and even though there are low migration numbers this year, for an unknown reason, there are still gems like this flying around.