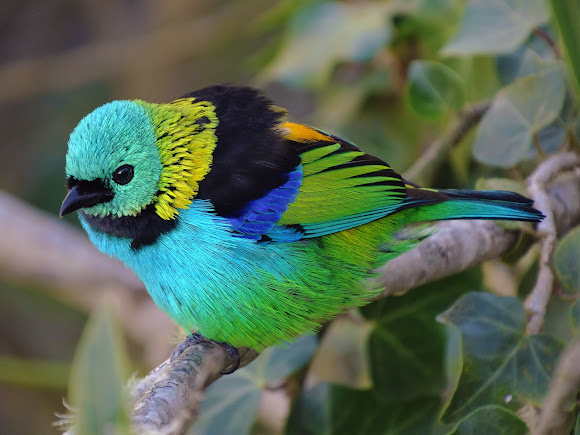 The Green-headed Tanager (Tangara seledon) is a bird found in the Atlantic forest in south-eastern Brazil, far eastern Paraguay, and far north-eastern Argentina (Misiones only). As other members of the genus Tangara, it is a small colorful bird, measuring an average of 13.5 centimeters (5.3 in). While essentially a bird of humid forests, it is also common in orchards and parks, where it moves through the canopy, making itself inconspicuous, as its apparently flashy blue-green coloration camouflages it well amongst the foliage. It is also a regular attendant at bird tables, where its active behavior makes it far more conspicuous. Eats fruits and insects, chasing the latter from a perch.

Wow! Congratulations Aisse! What a beauty :)

Oh my! What an awesome bird. Love it. Great picture. thank you.

Wow, what a beauty! Thank you for sharing another wonder with us Aisse, & congratulations on another great Spotting of the Day!

Despite its flashy colors, the green-headed tanager is surprisingly well camouflaged amongst the foliage of the humid tropical forests of South America.

The colours!!! What camera do you use?

Wow, that is gorgeous!