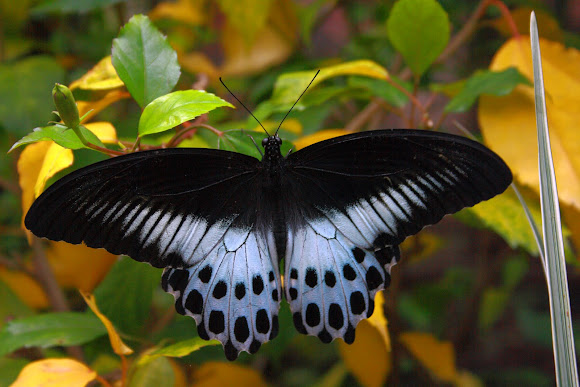 Males have the upper wings rich velvety black. The fore wing has a postdiscal band composed of internervular broad blue streaks gradually shortened and obsolescent anteriorly, not extended beyond interspace 6. The hindwing has the terminal three-fourths beyond a line crossing the apical third of the cell pale blue, or greyish blue, with superposed postdiscal, subterminal and terminal series of black spots—the postdiscal spots elongate, inwardly conical; the subterminal oval, placed in the interspaces, the terminal irregular, placed along the apices of the veins and anteriorly coalescing more or less with the subterminal spots. (Wikipedia)

The butterfly is most common in heavy rainfall areas, such as evergreen forests. Also common in deciduous forests and wooded urban areas, primarily due to the cultivation of its host plants, i.e. the Citrus species. (Wikipedia)

A beautiful and colorful photo....

What an absolutely stunning creature, and well captured Hari! Such beautiful wing colours...