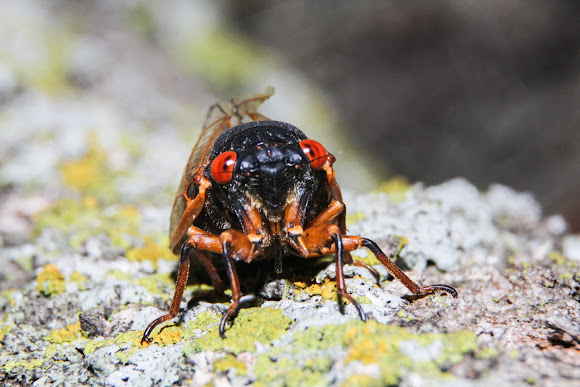 2014 is the big year for Iowa's 17-year cicada brood. Found in South Central and South Eastern Iowa and limited parts of Illinois and Missouri. Millions of these bugs can be found in a very small amount of space making a deafening noise. No joke, my ears were in pain because of these. Only males call. They are Black bodied with vivid red eyes and orange legs and wings. Three species are reported with this brood and include M. septendecim, M. cassini, M. septendecula. Adults do not eat and do no damage to foliage. Thank goodness they quiet down at night.

Large gathering in trees along forest lines, or out in the open made trees come to life.

I'm just a year older than these bugs. Check out the video. Oh, and they'd eject some liquid if approached, so it felt like it was raining when I was taking the video. Some can even be seen in the video.

Please consider adding this to the global mission, The Hoppers: http://www.projectnoah.org/missions/8096...

Thank you, LuckyLogan for sharing the pictures and video.
I hear the cicadas here all the time, I love it, I know they can get very loud but isn't it nice they are still here!!

This is fantastic Logan! Thank you for sharing!