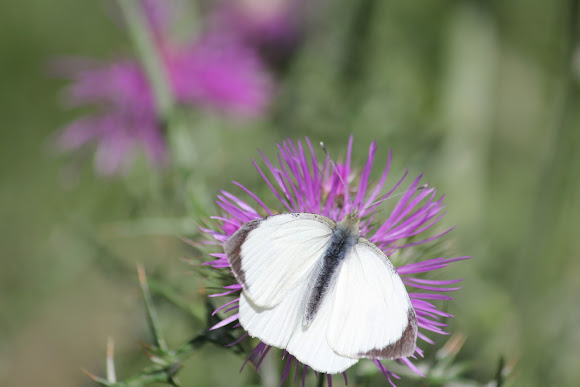 The large white is common throughout Europe, north Africa, and Asia to the Himalayas often in agricultural areas, meadows and parkland. It has managed to establish a population in South Africa and in 1995 it was predicted to spread to Australia and New Zealand. The large white is a strong flier and the British population is reinforced in most years by migrations from the continent. Scattered reports of the large white from the north-eastern United States (New York, Rhode Island and Maine) over the past century are of a dubious nature and indicate either accidental transport or intentional release. Such introductions threaten to establish this agricultural pest in North America.

The large white butterfly's habitat consists of large, open spaces, as well as farms and vegetable gardens, because of the availability of its food source. Some favoured locations include walls, fences, tree trunks, and often their food plant, which is important for large white survival since they need to have access to their food source for survival. They primarily hover around these locations, which should contain both wild and cultivated crucifer, as well as oil-seed rape, cabbages, and Brussels sprouts