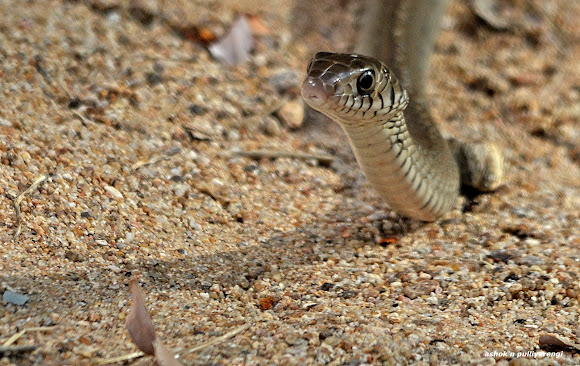 The rat snake is found close to human habitation because rodents are plentiful there. They are often mistaken for the venomous cobra. In South India, it is believed that the rat snake is the female of the cobra , which is false. It is also believed that the rat snake is addicted to milk, which is false too. During the breeding season, this snake has a spectacular 'war dance'. During this dance, the two males rise vertically above the ground and twine around each other. They do not injure the opponent during this display which can last up to about 45 minutes at times. How the victor is decided is not clear, but the loser quietly leaves, and the victor moves cautiously to the female who is usually somewhere nearby. Today it is amongst the few protected species as large populations have been wiped out by humans who hunted it for its meat that is eaten and its skin