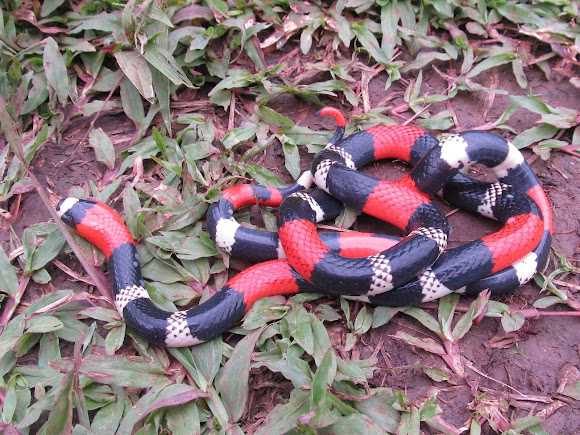 M. lemniscatus helleri is a long coral snake, relatively speaking. Although the maximum length given is 1.45 meters, I measured one at 1.64. They are a very pretty snake with colors arranged in triads (red, black, white, black, white, black, red). The tip of the nose is black followed by a white band of varying width ahead of the eyes. Covering the eyes is another black band, then a red band covering the back of the head and the first few dorsal scales. This red band is the start of the first triad.

This particular snake was found in undergrowth while clearing trails in the Amazon rainforest of Southeast Ecuador (700 masl).

Of the coral snakes found in this area, this is the most “aggressive" one. While most coral snakes won't bite unless stepped on or picked up, and even then some are quite gentle, this one will bite immediately. Those warning colors aren’t just for show.

Thanks Antonio. Scanning the wildlife data base, I am surprised at the lack of Coral Snakes. Hopefully I can shake some out of somewhere. Anyway, it will be fun seeing how many we can find.

Gorgeous Tukup,fantatic collours,perfect to your new mission :-)
Congrats and thanks for sharing.

What an absolute beauty! Cheers for sharing, Tukup :)

Thanks Tania. Fungi are interesting and birds are pretty but snakes are my passion when it comes to the natural realm.

Thanks Zlatan. I believe admiring them from afar could be considered "social distancing." I prefer "up close and personal" with just enough distance to show respect.

So very beautiful. Thank you for the interesting information.

real beauty, but I still prefer to admire it from afar...

They are beautiful. Thanks ornithoptera.