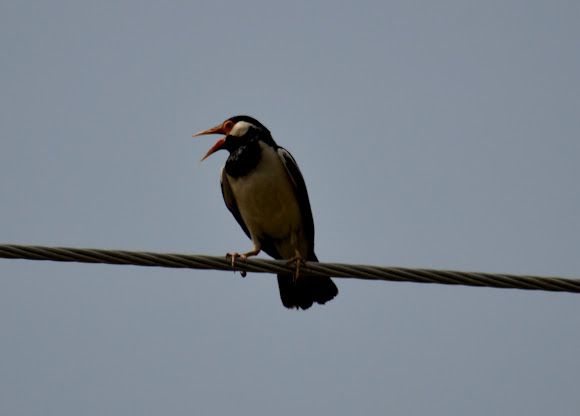 The species has been included in the genus Sturnus and Sturnopastor in the past but recent studies do not support its inclusion within Sturnus leading to the reinstatement of an older genus name Gracupica.[5][6] It has been claimed that the species name "contra" is derived from an Indian name for it, although this has not been traced subsequently. Heads of subspecies G. c. contra (top), G. c. superciliaris (middle), and G. c. jalla (bottom); illustration by Joseph Smit, 1890 The nominate subspecies (based on the species description given by Linnaeus in 1758) is found mainly along the Gangetic plains extending south into Andhra Pradesh and east to Bangladesh. The population in northeastern India (Sadiya to Tirap and the Naga Hills) was named as sordida (originally Sturnus contra sordidus) by Sidney Dillon Ripley in 1950. This form differs from the Indian form in having reduced streaking on the shoulders and nape. The populations in Manipur south to Myanmar and east to Yunnan have the white extending over the eye and are included in the subspecies superciliaris first described by Edward Blyth in 1863. The subspecies in Thailand, Laos and Cambodia is included in floweri ( Sharpe, 1897) while jalla described by Horsfield in 1821 is found on Sumatra, Java and Bali.

The species is found mainly in the plains but in the foothills up to about 700m above sea level. They are found mainly in areas with access to open water. Their main distribution in India is in the Gangetic plains but extending south to the Krishna River. Their range is increasing, with populations establishing more recently in Pakistan, Rajkot, and Bombay (since 1953), possibly aided by trade in caged birds and accidental escape.[12] Their westerward spread in India particularly in parts of Rajasthan has been aided by changes in irrigation and farming patterns, and the spread into Sumatra has been aided by deforestation. The species has also established itself in Dubai, UAE. The habitat is lowland open areas with scattered trees near water, often near human habitation. This species is often seen at sewage farms and refuse tips.

I believe you should listen to Xiaoxuan. She's a expert