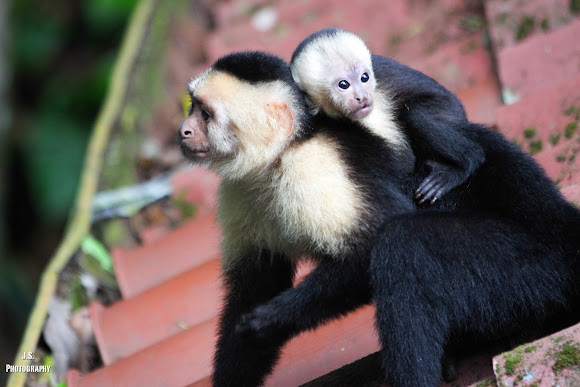 I was walking to breakfast at a resort in Costa Rica, a friend and I were talking about how we would really like to see a monkey. Then he stopped, and I followed his gaze to find a white-faced capuchin scavenging in a tree. Some friends who were already at breakfast called me over, and these monkeys were everywhere at the restaurant! They practically lived on food they stole from the restaurant and ate.

At a restaurant at a resort in Jacó, Costa Rica.

The monkeys were resting on nets in some photos. The nets were built in-between the roofs of the restaurant (probably to limit capuchins that got in).

Thank you! It was an amazing sight to see.

That is an excellent photograph Jack!

It was amazing! I was on a mission trip with my church youth group and we're back now, but the wildlife was unbelievable!

Nice! How is it in costa rica