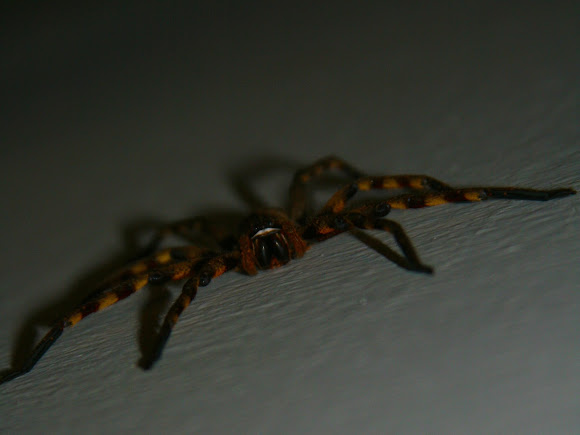 Palystes is derived from either the Latin "palaestes" or Greek "palaistes" meaning wrestler. These are the large spiders, often referred to as "tarantulas", that cause havoc by entering buildings during summer or before rain. These spiders were previously listed as potentially dangerous. After tests where they were induced into biting guinea-pigs it was established that although the guinea-pigs had died within 3 minutes, it had been from shock and not the effects of any venom. For humans, the venom is in fact no worse than a bee sting although the spider's aggressive display, with its 2 front pairs of banded legs raised in warning, is enough to shrink the stoutest of hearts. They occur usually in vegetation but sometimes occur in the home. Palystes occurs mainly on plants where it hunts various insects but is also regularly found in the home where they are fond of hunting geckos (usually the Marbled leaf-toed gecko, Afrogecko porphyreus in the Western Cape or the Cape dwarf gecko, Lygodactylus capensis in the eastern parts of southern Africa) and are sometimes called lizard-eating spiders. They usually appear in the home just before the onset of rain and the males are regularly seen in August to December, probably looking for females and also females busy foraging. Palystes is also regularly seen in more unfortunate circumstances where it is being dragged around by a wasp or often the wasp is missing and all one finds is what seems to be a dead spider on the pathway. What has in fact happened is that the spider has been stung and immobilized by a female wasp of the family Pompilidae. These wasps hunt only spiders that they sting and paralyse and then stock each of their nests with a paralyzed spider, lay an egg on it and then seal the nest. The wasp eggs then hatch and the larvae have live fresh food on which to feed. All peripheral tissue is eaten first and lastly the vital parts so the meal stays fresh long enough for the larva to mature and then pupate.