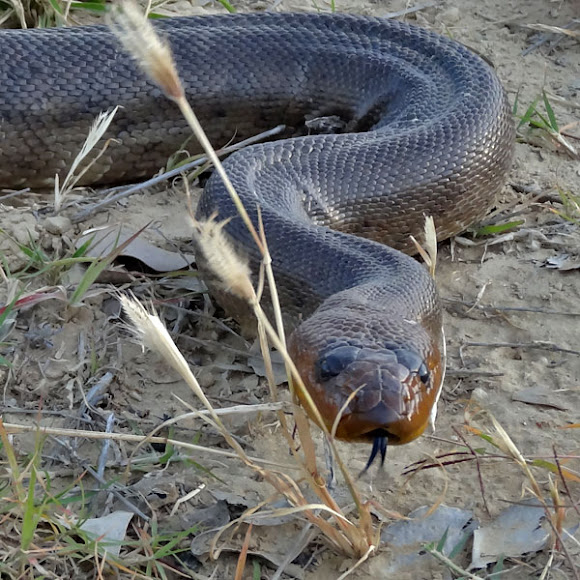 Woma Pythons are one of only two species of Python under the Aspidites genus. These snakes lack the heat sensitive pits between the labial scales and the larger triangular heads that most other python species have.This species is classified as Endangered (EN) on the IUCN Red List of Threatened Species, as such the location here is only approximate.

Found in Australia in the west and center of the country: from Western Australia through southern Northern Territory and northern South Australia to southern Queensland and northwestern New South Wales. Normally found in drier "Mulga" country.

Found this one on a mining access track. Quite large, this one was almost 2 meters in length I'd say. Cranky old fella he was too. Quite smart, constantly moving his tail behind his body. Eventually I got him. Relocated him a few hundred meters off the road.

Thanks for the comments everyone!

Great looking python - nice colour around the head. Thanks for sharing this Nathan. I always associated pythons with rainforests.

Absolutely fantastic spotting Nathan... and a great looking snake too. Never heard of it before something to read about. I hope numbers are holding up. Thanks for this.

Well done, Nath. First wild spotting of a Woma on Project Noah, and what a beauty!!!