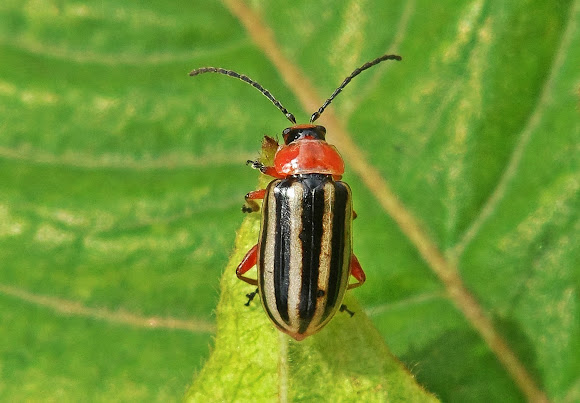 The adults are very small to moderately sized Chrysomelidae (i.e. among beetles in general they are on the smallish side). They are similar to other leaf beetles, but characteristically have the hindleg femora greatly enlarged. These enlarged femora allow for the springing action of these insects when disturbed. Flea beetles can also walk normally and fly. Many flea beetles are attractively coloured; dark, shiny and often metallic colors predominate. Adult flea beetles feed externally on plants, eating the surface of the leaves, stems and petals. Under heavy feeding the small round holes caused by an individual flea beetle's feeding may coalesce into larger areas of damage. Some flea beetle larvae (e.g. of Phyllotreta species) are root feeders. In adverse weather conditions (rain, for example) some flea beetles seek shelter in the soil. Some species, such as Phyllotreta cruciferae and P. striolata, prefer to leave their hideouts only during warm and dry weather. The German name Erdflöhe (literally "earth fleas") refers to their jumping ability and this behavior of hiding in the soil.